Jake Paul vs Anderson Silva fight is being finalized for October

Jake Paul looks to have an opponent for his next fight, and it is another great from the land of mixed martial arts. However, this time it is the man many believe to be the best striker in cage fighting history, the one, and only Anderson Silva.

On Tuesday morning, TMZ Sports broke the news that sources had confirmed to the outlet a bout between the YouTuber turned boxing sensation and the UFC icon was done and would be going down at a yet-to-be-determined location and venue in October. MMAFighting reported soon after that their own sources claimed that while the booking was not yet final, it was officially “in the works.”

The reports come after Paul’s promotional company, Most Valuable Promotions, tweeted on Saturday that, “Next week we will announce JAKE PAUL’s next opponent. [Jake Paul] will almost certainly be the underdog. He knows that and he wants that.”

While Silva is a legendary figure in MMA and the UFC for his elite-level striking — and is far more dangerous with his fists than previous Paul opponents Tyron Woodley and Ben Askren — there is still the fact that he is 47 years old. Considering Paul’s power and youth at 25 years old, the bout may very well be a pick ’em.

Boxing outlet No Smoke Boxing is reporting the fight could take place on Oct. 29.

This has been a difficult summer for Paul. Two different opponents dropped out of a main event slot at New York’s Madison Square Garden that would have taken place earlier this month. First, Tommy Fury — the half-brother of heavyweight champion Tyson Fury — fell out of the booking after having issues with getting clearance to travel from the United Kingdom to the United States. Replacement opponent Hasim Rahman, Jr. dropped out of the matchup weeks before the event after evidence revealed he would be unable to make the contracted weight for the bout.

The Ohio native has not fought since a December knockout win over former UFC welterweight champion Woodley in a short-notice rematch of their bout from four months earlier.

After ending his legendary UFC run by losing seven of his last nine, “The Spider” made the transition to boxing full time in June of 2021. In his debut he stunned combat sports observers by outpointing former middleweight champion Julio Cesar Chavez, Jr. He followed that up three months later with a first-round KO of fellow Octagon legend Tito Ortiz at a Sept. Triller Fight Club card. 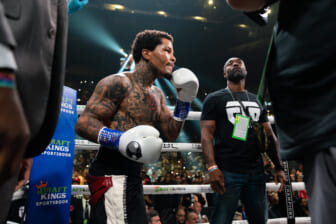 Most recently, he dominated fellow MMA veteran Bruno Azeredo in an exhibition bout in Dubai this past May.

Silva has the record for most successful consecutive title defenses in UFC history and is considered the greatest competitor in middleweight history, as well as one of the five best fighters of all-time in MMA history.