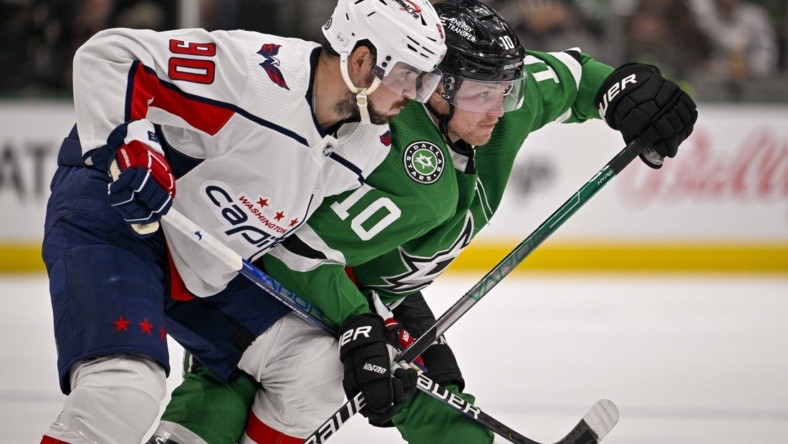 Jake Oettinger made 27 saves for his first shutout of the season and the Dallas Stars defeated the visiting Washington Capitals 2-0 on Thursday night.

Jason Robertson and Joel Kiviranta each scored his third goal of the season for the Stars, who had lost two straight. Oettinger recorded his third career shutout.

Darcy Kuemper made 25 saves for the Capitals, who had won four of their past five while averaging more than four goals per game.

Dallas has allowed just two goals overall in three home games this season, all wins. The Stars have won five of their past seven meetings with the Capitals.

The Stars took a 1-0 lead at 16:50 of the first period. After a scramble behind the Capitals’ net, Dallas’ Roope Hintz came away with the puck and passed to Nils Lundqvist in the high slot. Robertson deflected Nils Lundqvist’s shot from the slot past Kuemper.

Kiviranta increased the lead to 2-0 with a great individual effort. With Dallas short-handed and the momentum appearing to shift, Kiviranta forechecked and stole the puck from defenseman John Carlson high in the Washington zone, came in alone on Kuemper and scored on a backhand shot at 10:54 of the third period.

Dallas’ Radek Faksa nearly made it 3-0 on a similar play when he stole the puck from defenseman Dmitry Orlov and hit the post with about six minutes remaining.

Washington pulled Kuemper with 3:50 left in the game and generated sustained offense. Alex Ovechkin hit the crossbar on a one-timer with about two minutes remaining, but Washington was ultimately unable to solve Oettinger.

Dallas dominated the faceoff circle, winning 68 percent of the draws and were able to prevent the Capitals from generating odd-man rushes.

The Capitals and Stars each went 0-for-3 on the power play.