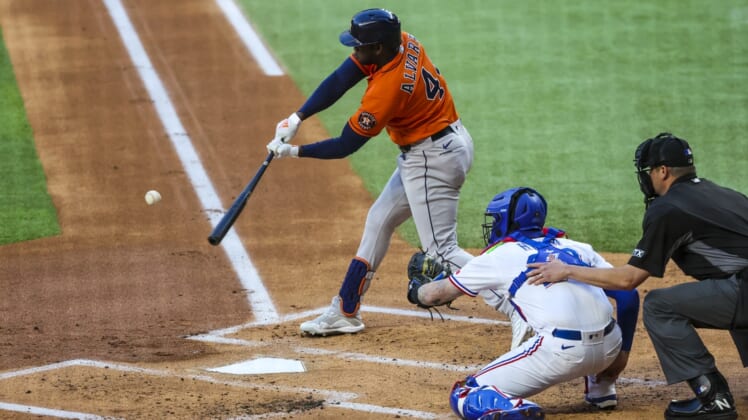 Jake Odorizzi retired the final 12 batters he faced in an exceptional start as the visiting Houston Astros claimed a 5-1 victory over the Texas Rangers on Tuesday in Arlington, Texas, to knot this four-game series.

Odorizzi (1-2), who recorded just two outs in his previous start, logged six strong innings, allowing one hit and one walk while notching four strikeouts. He was the picture of efficiency and set the tone by retiring the Rangers in order on just eight pitches in the bottom of the first inning.

Texas center fielder Adolis Garcia recorded the lone hit against Odorizzi by smacking a 2-2 slider over the wall in left field to knot the game at 1-1 with one out in the second inning.

It marked the first home run Odorizzi surrendered this season despite his previous struggles and was the eighth homer in 19 career games for Garcia against the Astros, who had lost five of six entering the night.

But after walking designated hitter Willie Calhoun leading off the third, Odorizzi settled in. He did not allow another baserunner, recording eight fly-ball outs and three strikeouts over his final four innings of work, including strikeouts of Andy Ibanez and Brad Miller for the first two outs of the sixth.

Odorizzi tossed just six pitches in the fourth inning and 11 in the fifth. He threw 78 pitches, 50 for strikes, after entering his fourth start with a 9.00 ERA and 16 hits allowed over nine innings.

The Astros carved out some breathing room for Odorizzi with a three-run fourth inning that included a run-scoring fielder’s choice from Yuli Gurriel that proved pivotal. Gurriel was initially ruled out but the Astros challenged the play and the double-play call was reversed. Alex Bregman scored on the play and Gurriel came home one batter later when Kyle Tucker bashed a 426-foot home run, his third, off Texas left-hander Taylor Hearn (0-2) that upped the Houston lead to 4-1.

The Rangers loaded the bases in the seventh inning against Astros relievers Blake Taylor and Rafael Montero, but Montero punched out Calhoun, representing the tying run, to end the threat.