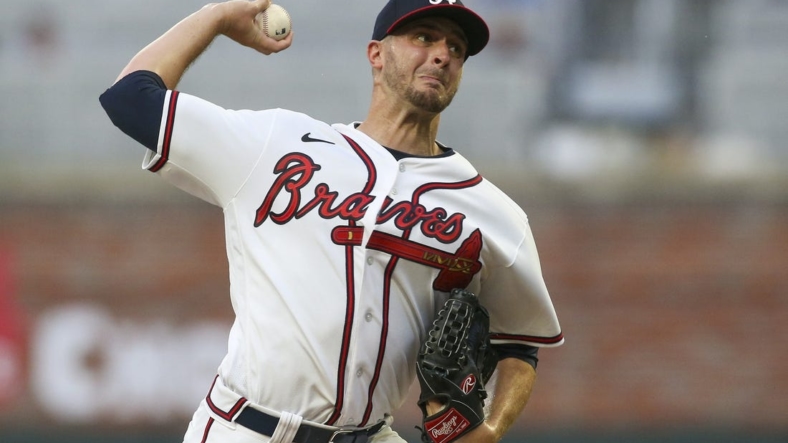 Jake Odorizzi will test his mechanical adjustments against the host St. Louis Cardinals on Sunday night when the Atlanta Braves bid for their sixth consecutive series victory.

The Braves posted an 11-4 victory on Friday in the opener of their three-game series at Busch Stadium. The Cardinals rallied from a four-run deficit to secure a 6-5 win on Saturday.

Odorizzi (5-5, 3.95 ERA) tossed six strong innings in a 2-1 victory over the Pittsburgh Pirates in his last start. He allowed the one run on four hits while striking out seven batters and retiring 14 of the final 15 batters he faced.

“It’s good to see the results after what I thought I found the last start,” Odorizzi said. “Change up the mechanics, change up the windup, the set position again, just like I did the other day. Same results. Just felt way more in control, way more balanced and effective in the zone, really.”

In his first three starts since arriving in a trade with the Houston Astros, Odorizzi allowed 10 runs (nine earned) on 22 hits in just 13 2/3 innings.

He is 2-1 with a 2.91 ERA in four career starts against the Cardinals. Albert Pujols (0-for-10, three strikeouts) and Paul Goldschmidt (0-for-3, two strikeouts) have struggled against him.

The Cardinals, who have won 11 of their last 14 games, will start Adam Wainwright (9-9, 3.11) on Sunday. Wainwright allowed just three runs on 11 hits in 22 innings over his last three starts.

Acuna sat out Saturday’s game with knee inflammation. He could return to action for the series finale.

Braves reliever Jackson Stephens went on the seven-day injured list with a concussion. Stephens was hit on the right side of his forehead by Brendan Donovan’s line drive Friday.

“That’s one of the most sickening things you can witness in a game,” Braves manager Brian Snitker said.

The Braves promoted reliever Jay Jackson from Triple-A Gwinnett to replace him.

“He’s in a stretch now where it hasn’t looked good,” Cardinals manager Oliver Marmol said. “We’re diving into it and trying how to get more swing and miss on that fastball. If you look at overall ‘chase’ on it and contact on it, it’s a lot different than what we’ve seen in the past.”

Arenado went 4-for-4 with a two-run homer Saturday after welcoming his first child into the world. “It’s been nice, it’s been a good few days,” Arenado told Fox Sports.