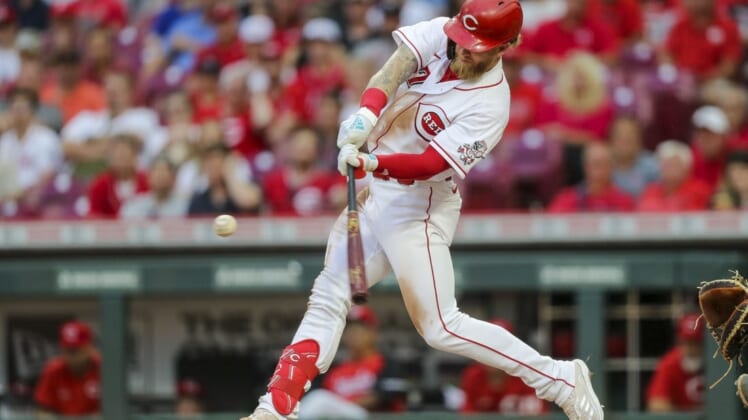 It took a little longer than the Cincinnati Reds might have expected, but Jake Fraley is beginning to show the type of franchise cornerstone type of talent they envisioned when they acquired him from the Seattle Mariners in spring training.

Fraley will look to help the Reds win the rubber game of a three-game series Sunday afternoon, when Cincinnati visits the Pittsburgh Pirates in a battle of National League Central rivals.

Fraley hit a two-run homer into the Allegheny River Saturday night as the Reds rolled to a 10-1 victory.

Fraley’s mammoth blast — he is just the 44th player to homer beyond the right field seats and into the water since PNC Park opened in 2001 — was his fifth round-tripper in 17 games since July 30, when he returned after missing three months with a left knee injury.

“It’s as good as you think it feels,” Fraley said of hitting the long homer. “It’s awesome. It’s a blessing.”

The 27-year-old — obtained from the Mariners in the deal that sent third baseman Eugenio Suarez and outfielder Jesse Winker to Seattle on March 14 — is hitting .333 with 11 RBIs while drawing seven walks and striking out 10 times since his return. Fraley has batted leadoff in six of his past seven starts — his first appearances out the leadoff spot in his career.

“I think the obvious (skill) is the ability to get on base, but that spot comes back around at the end of the game,” Reds manager David Bell said. “And the way he’s been swinging the bat, he’s a guy that we want at the plate.”

The similarly rebuilding Pirates — the Reds’ win Saturday lifted them out of a last-place tie in the NL Central with Pittsburgh — have done some mixing and matching this weekend as Thompson and Tyler Beede audition to remain part of the rotation.

Beede, making his fourth start since moving to the rotation, took the loss after allowing five runs (four earned) in four innings Saturday. Thompson last started Aug. 14 but made an appearance out of the bullpen Thursday, when he gave up two runs while recording one out against the Boston Red Sox.

Manager Derek Shelton said he wasn’t sure if the Pirates would employ a five- or six-man rotation down the stretch. Thompson said he was ready to fill whatever role Shelton asked.

“If I’m in the bullpen, if I’m starting, if I’m a hybrid guy — back and forth — I don’t care,” Thompson told MLB.com. “Whatever helps the team win, whatever position I can fill to help us win, I’ll do it.”

Minor took the loss Monday, when he gave up four runs over five innings as the Reds fell to the Philadelphia Phillies, 4-3. It was the third loss in as many August starts for Minor, who is 0-8 with a 6.02 ERA in 10 starts since earning his lone win on June 13.

Thompson didn’t factor into the decision Aug. 14 after surrendering five runs over four innings in the Pirates’ 8-7 loss to the San Francisco Giants.