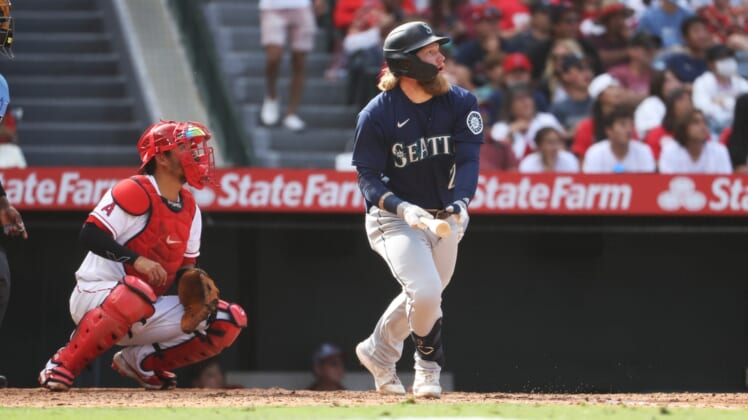 Jake Fraley hit a bases-loaded double in a fourth-run eighth inning as the Mariners broke a 1-1 tie.

Gonzales (10-5) allowed one run on three hits to win his ninth consecutive decision. The left-hander walked three and struck out five.

Ohtani, seeking his 10th victory of the season, went seven innings and allowed one run on five hits. The right-hander didn’t walk a batter and matched his season-high with 10 strikeouts.

The only run he allowed came on the rookie Kelenic’s homer to right with one out in the seventh. The blast is Kelenic’s 14th of the season.

The Mariners took advantage of the Los Angeles bullpen in the eighth.

J.P. Crawford led off with a double off left-hander Jose Quijada (0-2). With one out, Kyle Seager reached on an infield single as Crawford took third. Right-hander Austin Warren replaced Quijada and allowed a line-drive single to center by Mitch Haniger to give the Mariners a 2-1 lead. Abraham Toro then reached on a fielder’s choice on first baseman Jared Walsh’s throwing error to load the bases.
Fraley’s three-run double to center to make it 5-1.

Los Angeles’ only run came on Suzuki’s homer to left with one out in the bottom of the second. It is his 16th of the season.

Ohtani allowed just one hit through the first four innings before the Mariners put two runners on in both the fifth and sixth.

In the fifth, Toro led off with a single and moved to second on Kelenic’s one-out single. Ohtani got Tom Murphy and Jake Bauers to fly out to left field to end the inning.

In the sixth, Ty France was hit by a pitch with one out and Seager followed with a single. Ohtani fanned Haniger for the second out and got Toro to fly out to center.