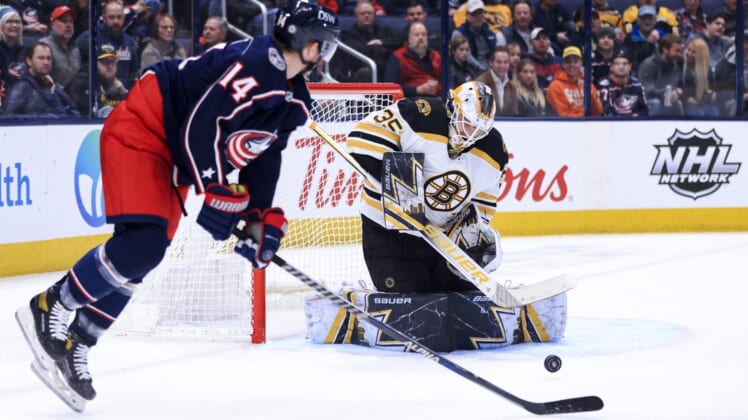 Jake DeBrusk scored his second goal of the game at 1:03 of overtime to lift the visiting Boston Bruins to a 3-2 win against the Columbus Blue Jackets on Monday.

DeBrusk scored from the bottom of the right circle off a feed from Hampus Lindholm.

Charlie McAvoy extended his point streak to five games with two assists for the Bruins, who have won three straight and are 12-2-1 in their past 15 games. Boston’s Craig Smith also scored, and Linus Ullmark made 20 saves for the win.

Emil Bemstrom and Zach Werenski scored, Jakub Voracek had two assists and Elvis Merzlikins made 34 saves for the Blue Jackets, who are 0-4-3 in their past seven games.

Bemstrom gave Columbus a 1-0 lead at 4:31 of the first period. Voracek rimmed the puck along the right wall, and it rolled to Bemstrom in the neutral zone. Bemstrom cut through the two Bruins defensemen before snapping a shot from the right circle short side over Ullmark’s shoulder.

McAvoy sprung DeBrusk on a breakaway to tie it 1-1 at 18:32 of the opening period, extending DeBrusk’s goal streak to five games.

Smith finished off a lengthy Bruins stretch in the offensive zone with a shot from the high slot through traffic to put the visitors ahead 2-1 at 7:52 of the second period.

Werenski, back in the lineup after missing three games with an upper-body injury, tied it 2-2 with 16 seconds remaining in the middle frame. Voracek, behind the net to the right, slid a pass out to Werenski in the left circle for a one-timer that beat Ullmark inside the far post.

Boston challenged the goal for high-sticking on defenseman Vladislav Gavrikov’s keep-in at the blue line, but the goal stood after a video review.

The game was the opener of a four-game road trip for the Bruins, who play at Detroit on Tuesday. The Blue Jackets, who lost 5-2 at Boston on Saturday, head to Philadelphia on Tuesday for the start of a home-and-home set against the Flyers.