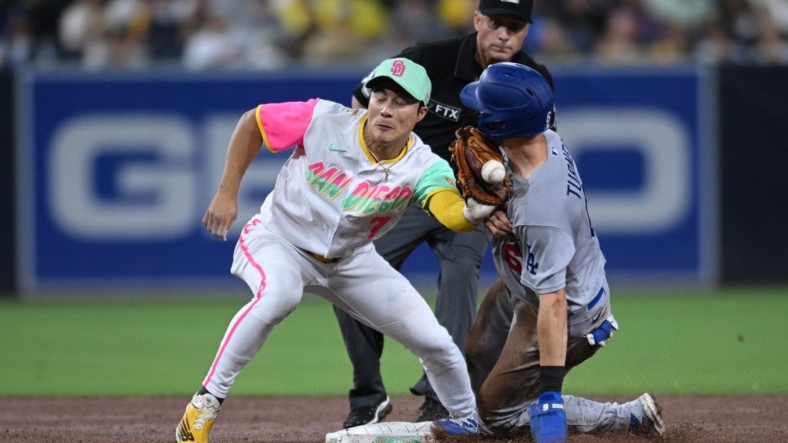 Jake Cronenworth hit a game-ending single with one out in the 10th inning Friday night to give the San Diego Padres a 5-4 win over the visiting Los Angeles Dodgers.

The Padres (77-62) moved into the second National League wild-card slot, a half-game ahead of the Philadelphia Phillies (76-62). San Diego is four games in front of the Milwaukee Brewers (73-66), who sit fourth in the race for three wild-card positions.

Left-hander Adrian Morejon (4-0) retired the first three hitters in the Dodgers’ batting order in the top of the 10th, stranding the automatic runner at second.

Heath Hembree (3-1) opened the bottom of the 10th for the Dodgers. He started by intentionally walking Manny Machado before striking out Josh Bell. Cronenworth then lined a single to right, with automatic runner Juan Soto easily beating a wide throw by Mookie Betts to the plate.

The Padres are 11-3 in extra innings this year and have 11 walk-off wins. San Diego beat Los Angeles (94-43) for just the fourth time in 14 meetings this season. The Dodgers, who had won four of their previous five games overall, still lead the National League West by 18 games.

Five Padres relievers held the Dodgers to one hit over five scoreless innings.

After a 45-minute rain delay at the start of the game, the Dodgers took a quick lead on Freddie Freeman’s 446-foot, solo homer in the first. In the second, San Diego’s Trent Grisham followed a leadoff single by Jake Cronenworth and a one-out walk drawn by Wil Myers with a three-run homer.

The Dodgers leveled the game in the third. Freeman hit a bases-loaded sacrifice fly, and Will Smith’s swinging bunt single toward third scored the tying run.

Trayce Thompson, who played for the Padres earlier this season, put the Dodgers on top 4-3 in the fourth with his ninth homer of the season.

A rare misplay by Betts in right allowed the Padres to tie the game at 4-4 in the fifth. Soto drew a one-out walk and Manny Machado followed a line-drive single to right that ricocheted off Betts’ glove and rolled behind far him toward right-center, allowing Soto to score from first.