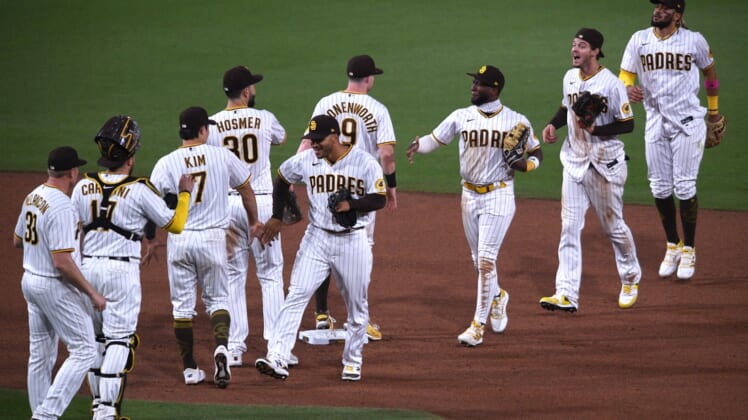 Jake Cronenworth, who entered the game in a 7-for-46 slump, broke a tie with a sharp single to right field in the sixth inning Wednesday night to lead the San Diego Padres to a 4-2 victory over the visiting Pittsburgh Pirates in the rubber match of a three-game series.

The Padres’ sixth started with Victor Caratini reaching on a fielding error by Erik Gonzalez, one of the third baseman’s three errors in the game. Pinch-hitter Trent Grisham followed with an opposite-field double off the fence in left.

After right-handed reliever Duane Underwood struck out Tommy Pham, Cronenworth pulled his second hit of the night through the right side. Underwood then got Fernando Tatis Jr. to ground into an inning-ending double play.

Padres relievers Craig Stammen, Tim Hill, Emilio Pagan and Mark Melancon retired 10 of the 11 Pirates they faced after Pittsburgh tied the game in the top of the sixth against Yu Darvish.

Stammen (2-1), who got the final out in the sixth with two on, was credited with the win. Melancon got his 11th save in as many chances. Underwood (1-1) took the loss.

The Padres opened the scoring when Caratini led off the third inning by pulling his second home run of the season into the right field stands against Pirates starter JT Brubaker. They extended the lead to 2-0 in the fifth when Tatis drew a one-out walk and came around on back-to-back singles by Eric Hosmer and Wil Myers.

But the Pirates rallied against Darvish. Bryan Reynolds homered to left on Darvish’s first pitch of the sixth inning. Gonzalez and Colin Morgan followed with back-to-back singles, and Gonzalez later scored on Ka’ai Tom’s sacrifice fly to center.