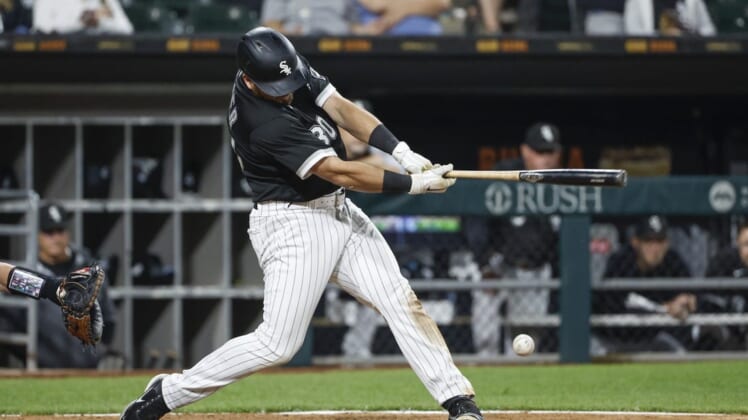 Jake Burger aims to continue his torrid stretch at the plate on Saturday afternoon when the Chicago White Sox vie for a series victory over the visiting Texas Rangers.

Burger is 10-for-20 with three homers, seven RBIs and nine runs during his six-game hitting streak. He had two hits in the series opener on Friday, including an infield single with two outs in the eighth inning that ignited a five-run uprising in Chicago’s 8-3 victory over Texas.

White Sox catcher Yasmani Grandal had an RBI single in the second inning on Friday and a two-run double in the eighth. He is riding a four-game hit streak and has reached base in all seven games this month.

Winners of four of their past six games, the White Sox will look to continue their recent good fortune on Saturday in the middle game of a three-game series. Chicago will send right-hander Lucas Giolito (4-2, 3.54 ERA) to the mound to oppose Texas left-hander Martin Perez (4-2, 1.56).

Giolito, 27, improved to 4-1 in his past six starts despite permitting five runs (two earned) on eight hits in a 6-5 win over the Tampa Bay Rays on Sunday. He tossed four scoreless innings before struggling over his final two frames.

“Baseball is so momentum-based,” Giolito said. “What was good was I got through six innings, despite giving up a lot of hits and contact by getting out of some early situations. The downside was the sixth inning, letting it get out of hand, letting the momentum swing back to their side. In my last inning, I didn’t execute my pitches.”

Giolito sports a 2-0 record and a 2.38 ERA in two career starts against Texas. He would be wise to tread carefully around Nathaniel Lowe, who belted a solo homer on Friday to highlight his third consecutive multi-hit performance.

Lowe’s recent success aside, the Rangers find themselves struggling this month. They have dropped seven of nine games in June.

“I’ve been saying it for the last couple of games: It’s nice that we’ve been hitting some balls out of the ballpark, but like I said, not enough pressure by getting guys on base,” Rangers manager Chris Woodward said. “We had some 3-2 counts, we just didn’t finish the at-bats off.”

Perez will look to continue his bounce-back season when he takes the mound on Saturday.

Perez, 31, went 4-0 with an 0.64 ERA in May to earn American League Pitcher of the Month. He opened June with a no-decision on Sunday despite allowing only two runs on seven hits in six innings against the Seattle Mariners.

His success this season comes in stark contrast to a couple of lackluster campaigns in Boston.

“When you recognize things aren’t going good, that’s when you get better,” Perez said, per the Dallas Morning News.

“When you think everything is good, that you’ve got everything, it’s really not that way. You have to know what is real and what’s not. And I think that’s what has happened to me.”