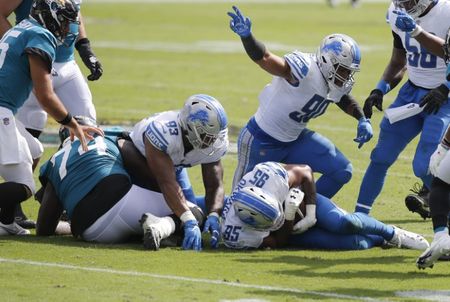 (Reuters) – Jacksonville Jaguars kicker Jon Brown notched a 31-yard field goal in the first quarter of his team’s 34-16 loss to the Detroit Lions on Sunday, a play that would scarcely warrant mention if not for it being the first field goal he had ever attempted in a regular-season game at any level.

Outside of a preseason stint with the Cincinnati Bengals – the 27-year-old had never attempted a field goal in any regular-season game in the National Football League, college, high school or anywhere else, ESPN reported.

Brown, who went undrafted in 2016, played college-level soccer at Kentucky before transferring to Louisville and pivoting to football in his junior year, where he specialized in kickoffs.

Previously a member of the Bengals and San Francisco 49ers practice squads, Brown was promoted to the Jaguars’ active roster last week as they released veteran Stephen Hauschka. The team confirmed that Brown was its fifth kicker in six weeks.