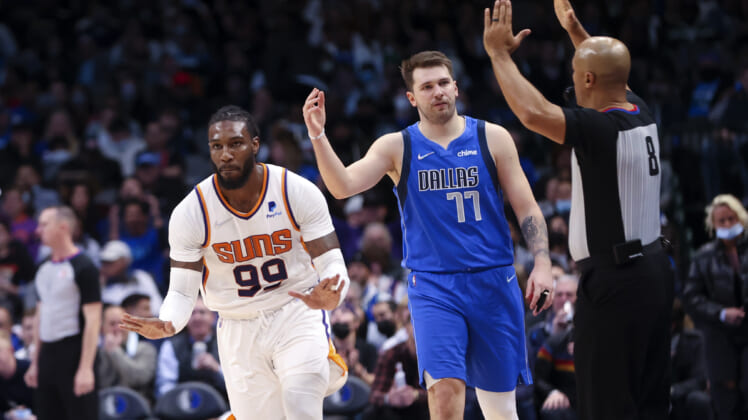 Crowder went up for what appeared to be a three-point shot in the second quarter, only to pass the ball off to teammate Deandre Ayton. In the process, he kicked Doncic in the family jewels.

We’re not going to say that this was on purporse. But it looked pretty darn bad. Warning for some of you. This video might be hard to watch.

That shuld be banned in all 50 states, every territory and the near 200 countries in the world. Heck, we’re sure Martians looked at this and cringed.

In any event, officials on hand in Phoenix went to review to see if this should be upgraded from a common foul. It was. Jae Crowder found himself assessed with a Flagrant 1 rather than a Flagrant 2 that would have cost him the remainder of the game.

In hilarious fashion, Golden State Warriors star Draymond Green also took to social media with a few emojis after he was given a Flagrant 2 and ejected in his team’s Game 1 outing against the Memphis Grizzlies Sunday afternoon.

We’re also happy to announce that Luka Doncic remained in the game after taking a bit of a much-needed break on the hardwood.