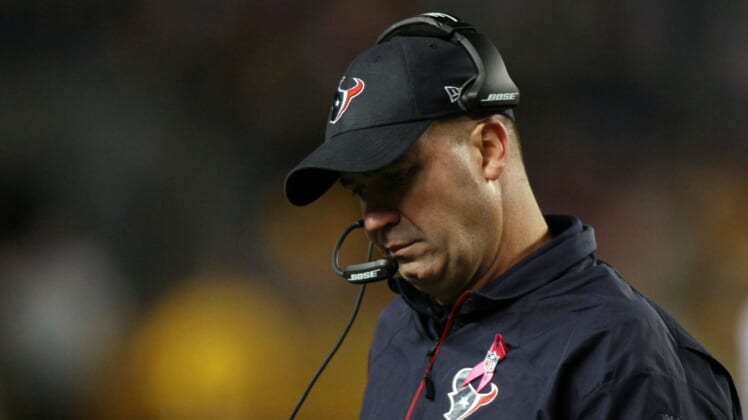 The Houston Texans entered the offseason flush with cap space and with an opportunity to both protect franchise quarterback Deshaun Watson and keep outside linebacker Jadeveon Clowney as their defensive star of the future.

Somehow, Bill O’Brien and the front office whiffed on both fronts.

Houston went into free agency with more than $70 million in cap space even after placing the franchise tag on Clowney. It timed perfectly with a free agent class that offered immediate upgrades along the offensive line.

Even after failing to address the offensive line in free agency adequately, the draft presented Houston’s front office with an opportunity to make up for its mistake. Offensive tackle Andre Dillard, the consensus best pass protector in the draft, fell into the 20s and sat just a few picks away.

Rather than trade a mid-round pick to move up and secure him, the Texans sat and watched the Philadelphia Eagles snipe Dillard right in front of them. Houston then reached in a big way for Alabama State offensive tackle Tytus Howard, a consensus second-round prospect viewed as a project at left tackle, with the No. 24 overall pick.

Time after time, the Texans had an opportunity to land a significant upgrade at left tackle and passed on it. When it became clear they wouldn’t give Clowney a contract extension and a trade was their best option, the team had one more chance to address the offensive line.

The Eagles, Miami Dolphins and Seattle Seahawks emerged as instant contenders for a trade. Houston could have righted its wrongs from earlier in the offseason by trading Clowney for an offensive tackle and future draft picks. Instead, it made its biggest blunder yet by getting fleeced in a deal that landed it two backup linebackers and Seattle’s 2020 third-round pick.

Seattle might not have even kept linebacker Jacob Martin through Saturday’s 53-man roster cutdown. Meanwhile, a third-round pick is the same compensation the Texans would have received if they kept Clowney and let him walk in free agency.

Houston used Brian Gaine as its scapegoat in June by firing him for previous free agency and draft blunders. The Clowney trade — the worst move of them all — is an even more significant indicator that Gaine wasn’t the front office’s big problem.

We saw what happened in Indianapolis with Andrew Luck. Ex-general manager Ryan Grigson never treated the offensive line like a priority and Luck was sacked 100 times in his first three seasons. The damage of the hits built up as he missed time and even played through numerous injuries that ultimately forced him to retire this season.

Watson already tore his ACL once behind a bad offensive line in 2017. That was followed up by an unfathomable 62 sacks and even more hits suffered last season. He’s capable of becoming an elite quarterback, and his willingness to play through a broken rib and partially collapsed lung shows the same toughness Luck had. But we might not ever see him reach his true potential if this continues.

All of the hits, injuries and rehabilitation take a toll at some point. It can take franchises a decade to find a quarterback of Watson’s talent. The Texans don’t seem to value the gift they have and fail to understand how quickly things can go wrong if the face of the franchise isn’t protected.

O’Brien is obtaining more decision-making power over the roster in Houston despite routinely underachieving as its coach. As he gains more control and Houston’s offensive line remains a disaster, the Texans are in growing danger of doing irreversible damage to their franchise quarterback’s health and their future.