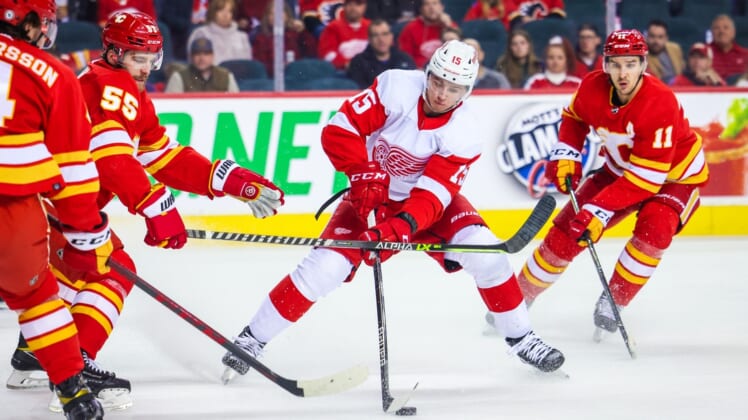 Jacob Markstrom made 19 saves to record his league-leading ninth shutout of the season and help lead the Calgary Flames to a 3-0 home win over the Detroit Red Wings on Saturday.

Elias Lindholm, Tyler Toffoli and Blake Coleman each scored for Calgary, which has won four of its last five games and carried the play throughout.

Red Wings goalie Thomas Greiss did his best to keep Detroit in the game, making 40 saves. The Red Wings have lost five games in a row and seven of eight.

The Flames struck first with 10:38 remaining in the first period on Lindholm’s 30th goal of the season. On a power play, he skated into the Detroit zone with speed and fired a wrist shot from in between the face-off circles that went past Greiss.

After a scoreless second period, Calgary got an insurance goal on another power play in the third period. Toffoli scored with 11:35 remaining after he camped himself right next to Greiss and slammed home a cross-crease pass from Matthew Tkachuk.

Calgary kept the pressure and netted a third goal when Coleman scored with 4:22 left.

As he was driving to the net, Coleman took a cross-ice pass from Christopher Tanev and pushed the puck into an open goal as he was falling on the ice and sliding toward the net.

The offense was more than enough for Markstrom, who held firm whenever he was tested.

Calgary finished 2 of 3 on the power play in the game, while Detroit failed on its two opportunities.