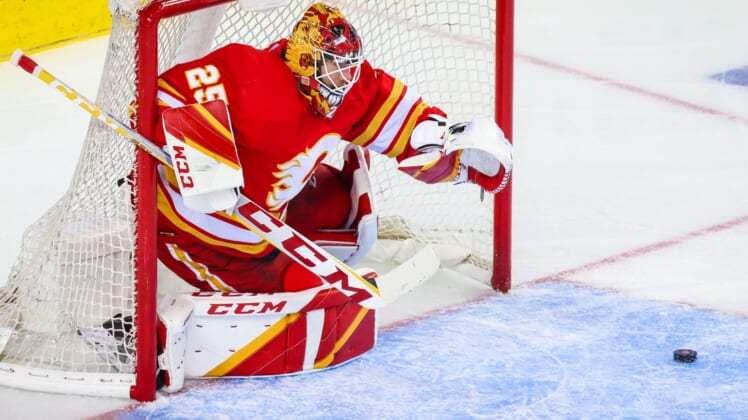 Elias Lindholm’s goal early in the first period held up for the game winner because of Jacob Markstrom’s shutout performance as the host Calgary Flames beat the Dallas Stars 1-0 on Monday to claim the opener of their Western Conference first-round series.

Markstrom made 16 saves to earn his second career playoff shutout. He collected nine shutouts in the regular season.

Markstrom also had some good luck, as Miro Heiskanen’s shot late in the second period rang off the post, about as close as the Stars came to beating him.

Game 2 of the best-of-seven series will be Thursday, also in Calgary.

The Pacific Division-champion Flames were all over the visitors from the drop of the puck, and were rewarded when Lindholm opened the scoring at the 5:01 mark. After winning a face-off in Dallas territory, Lindholm set up at his trademark spot near the right dot and one-timed a pass from Matthew Tkachuk for the power-play goal. It marked Lindholm’s fourth career playoff goal.

Calgary led the league by scoring first in 54 regular-season games.

The Flames continued to control play through the opening frame. Shots on goal were 9-0 through the first 7:43, and Dallas didn’t put a puck on net until 11:06.

The Stars eventually found their footing, and the goaltender duel became a big part of the entertaining and high-spirited affair.

There were a pair of fights at the end of the first period that followed Tkachuk’s hard, clean check on John Klingberg and was challenged by Michael Raffl. In the aftermath, Klingberg dropped the gloves with Rasmus Andersson, for which they were automatically ejected.