Radar guns clocked deGrom at 102 miles per hour, as he tossed 30 of his 41 pitches for strikes and at one point struck out six consecutive hitters for the St. Lucie Mets. He did not allow a hit.

If the 32-year-old responds well to the rehab outing, he could return as early as Tuesday or Wednesday against the Colorado Rockies.

deGrom has been out since May 11 when he was placed on the 10-day injured list with tightness in his ride side. He has since been cleared of any structural damage after receiving an MRI. 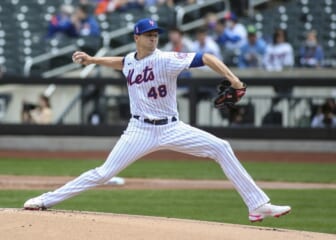