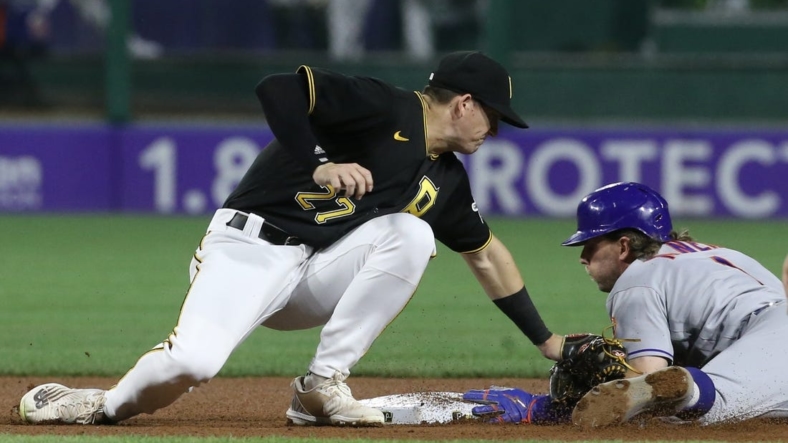 Francisco Lindor drove in three runs on two doubles and Jacob deGrom pitched seven scoreless innings Wednesday as the visiting New York Mets walloped the Pittsburgh Pirates 10-0 for a sweep of a doubleheader.

deGrom (5-1) gave up three hits and one walk, with eight strikeouts, and combined with Adam Ottavino and Alex Claudio on a four-hit shutout.

Jeff McNeil added a two-run single, Tyler Naquin an RBI double, and Eduardo Escobar and Daniel Vogelbach each an RBI single for the Mets (87-51), who with the sweep regained first place alone in the National League East after Atlanta pulled even on Tuesday.

Pittsburgh starter Johan Oviedo (2-2) gave up four runs and one hit in 1 2/3 innings, with two strikeouts and five walks.

The first two Pirates batters, Oneil Cruz and Bryan Reynolds, singled, but deGrom got out of the inning with a double play and a groundout and did not allow another baserunner until Jack Suwinski walked — just the fourth base on balls allowed by deGrom this year — with one out in the fifth.

New York took a 4-0 lead in the second. Mark Canha walked and, an out later, Escobar singled. James McCann walked to load the bases, and Brandon Nimmo walked to force in a run.

A wild pitch brought in Escobar, and Pete Alonso walked to again load the bases, as well as chase Oviedo for Eric Stout. Lindor’s double brought in two.

Against Zach Thompson in the fourth, McCann singled. An out later, Alonso singled. Lindor drove in McCann with a double, and McNeil hit a two-run single to increase New York’s lead to 7-0.

In the seventh against Tyler Beede, Canha doubled and scored on Naquin’s double. After a wild pitch, Escobar drove in Naquin with a base hit to make it 9-0.

McNeil doubled and scored on Vogelbach’s base hit against Yohan Ramirez in the eighth to put the Mets in double digits.