Jacksonville Jaguars head coach Urban Meyer came to the NFL confident he could transition to the pro level quickly and help turn a rebuilding franchise into a contender. Just a few months into the job, trouble is already emerging.

Meyer’s first mistake came in February, when he hired longtime friend Chris Doyle to join the coaching staff. The decision faced immediate criticism from across the league after Doyle was dismissed from Iowa following multiple allegations of racism. Ultimately, a day after the hiring, Doyle resigned from his position on Meyer’s staff.

A few months later, Meyer signed Tim Tebow and converted him to tight end. Once again, the college football legend gave a spot to someone he has strong personal ties with. While Tebow last much longer, he didn’t make it past the first round of cuts in August.

Click here for our Jacksonville Jaguars preview and 2021 predictions

Reports surfaced in July that Meyer was already frustrated with his new gig, bothered by some of the NFL’s restrictive rules and a fine he received for a practice violation. Now, according to NFL insider Pete Prisco, some Jaguars’ players are taking issue with Meyer’s style. 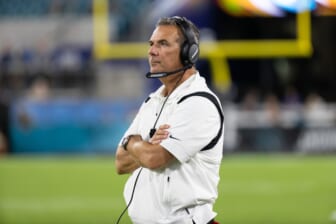 “He’s got to change a few things. He brought a bunch of college-like things to the program which I don’t necessarily agree with. I’ve heard some of the players aren’t thrilled with them either. One of his assistants on the field during practice with a boom mic telling everybody to hydrate, hustle and get to the next series. Obviously, he’s a work in progress. He’s been a good football coach everywhere he’s been. It’s a lot different when you recruit guys to your school and you’ve got a bunch of players, the five stars, then it is when you’re trying to build something.”

It certainly would help Meyer if his team saw the results of his practice style, but that isn’t happening. Jacksonville lost each of its first two preseason games and the club hasn’t looked particularly sharp in either performance.

Meyer has also received criticism for his handling of the quarterback situation. Determined to take a college-like approach, he refused to name his starting quarterback through the middle of August. While everyone knew Trevor Lawrence would be the starter, Meyer created the ruse of a quarterback competition.

The Jaguars once again look like one of the worst teams in the NFL, even after drafting a generational quarterback prospect. If things don’t work out well this season, it might be fair to wonder how long Meyer will stick around in Jacksonville.