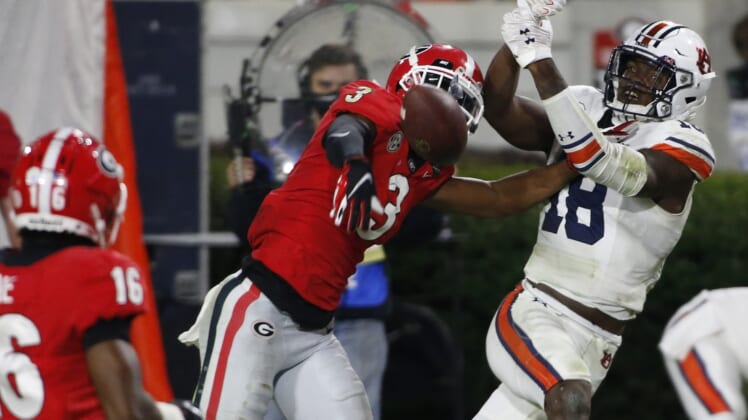 One day after the Jacksonville Jaguars picked a potential franchise quarterback to open the NFL draft, the team turned its attention to the opposite side of the ball.

Jacksonville selected Georgia cornerback Tyson Campbell on Friday to begin a busy night of drafting. Teams made their second- and third-round picks, and they will return to action Saturday to conclude the draft with Rounds 4-7.

Campbell, 21, started 24 games in three seasons with Georgia. He was a five-star recruit out of high school in Florida and ranked as the second-best cornerback in his class behind only Patrick Surtain Jr., who was a first-round pick by the Denver Broncos at No. 9 overall on Thursday night.

The New York Jets followed by taking Ole Miss wide receiver Elijah Moore with the second pick of the second round at No. 34 overall. The Broncos took North Carolina running back Javonte Williams at No. 35, the Miami Dolphins selected Oregon safety Jevon Holland at No. 36, and the Eagles picked Alabama center Landon Dickerson at No. 37.

The New England Patriots maintained their strong pipeline with Alabama when they selected Crimson Tide defensive tackle Christian Barmore with the sixth pick of the second round. Barmore will reunite with college teammate Mac Jones, whom New England drafted at No. 15 overall in the first round.

Florida State cornerback Asante Samuel Jr. had to wait until the middle of the second round until the Los Angeles Chargers selected him at No. 47 overall. Samuel Jr. led the Seminoles with three interceptions and served as a team captain in 2020 before opting out after eight games.

Notre Dame pass rusher Jeremiah Owusu-Koramoah slid to No. 52, when the Cleveland Browns selected him. Many draft analysts had projected the former Fighting Irish star to be a first-round pick after a junior season in which he was a first-team All-American, Atlantic Coast Conference Player of the Year and won the Butkus Award.

Kyle Trask was the only quarterback to go in Round 2. The former Florida Gators signal-caller was selected by the Tampa Bay Buccaneers, where he will learn under Tom Brady after throwing for 4,283 yards, 43 touchdowns and eight interceptions with the Gators in 2020.