He played in seven games as a senior in 2020, largely on special teams.

Lanier said he chose Jackson State, one of the Historically Black Colleges and Universities, to leave his mark.

Lanier said he fulfilled his goal as a youngster to play at his home-state Alabama — he won the College Football Playoff with the Crimson Tide in January — but was ready to play in a program where he could assume a leadership role.

And, Lanier wants to make an impression on young players, as well as pro scouts. 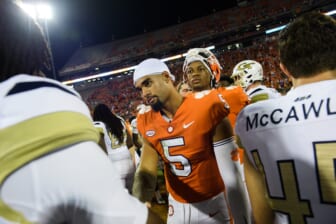 “It also gives me a way to show younger kids just because you’ve got other, bigger offers don’t mean that you have to go there,” Lanier said. “You can go to an HBCU. And hopefully once I go there and I can further my career to the NFL they can know that you can still go to an HBCU and go to the NFL.”