Jackets tie Wild in last minute, beat them in shootout 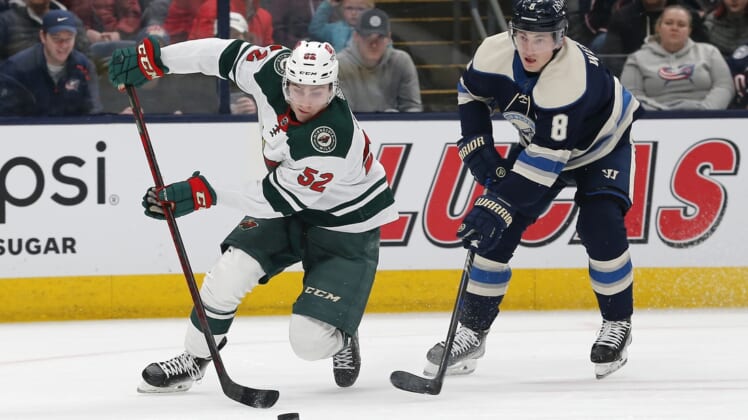 Zach Werenski scored the tying goal in the final minute of regulation, and Elvis Merzlikins stopped 36 shots, plus two of three in the shootout, as the Columbus Blue Jackets rallied for a 3-2 victory over the visiting Minnesota Wild.

Yegor Chinakhov scored the night’s first goal and the only one in the shootout as the Blue Jackets rebounded from Thursday’s disheartening 6-0 loss to the host New York Islanders. They were 0-2-2 in their previous four games.

Kirill Kaprizov posted his 30th goal and Mats Zuccarello broke a 1-1 tie with a second-period score for the Wild, who looked in good shape for a third consecutive win.

Columbus, which managed just 13 shots on goal over the final two periods after recording 14 in the first, pulled Werenski as it trailed 2-1. Werenski scored amid some net-front traffic to tie things with 30.4 seconds remaining in regulation.

The Blue Jackets showed some early jump and opened the scoring with 6:29 left in the first period. On the power play, the rookie Chinakhov found an opening into the slot and beat Kahkonen for his seventh goal of the season.

Minnesota, though, struck on a power play of its own with 26 seconds remaining in the first. With the Wild owning a four-on-three situation, Kaprizov went hard and high over the left shoulder of Merzlikins to tie the contest.

Kaprizov, who posted 27 goals in 55 games to win the Calder Trophy last season, has been even more potent in 56 contests this season. He has 72 points vs. 51 a season ago.

After a rather pedestrian start to the second period, the Wild broke the tie with 6:27 left in the middle frame. Jared Spurgeon took a shot from the point that Zuccarello perfectly deflected past Merzlikins for his 19th of the season.

In overtime, Columbus forward Patrik Laine, second on the team with 22 goals, labored to the bench with an apparent leg injury.