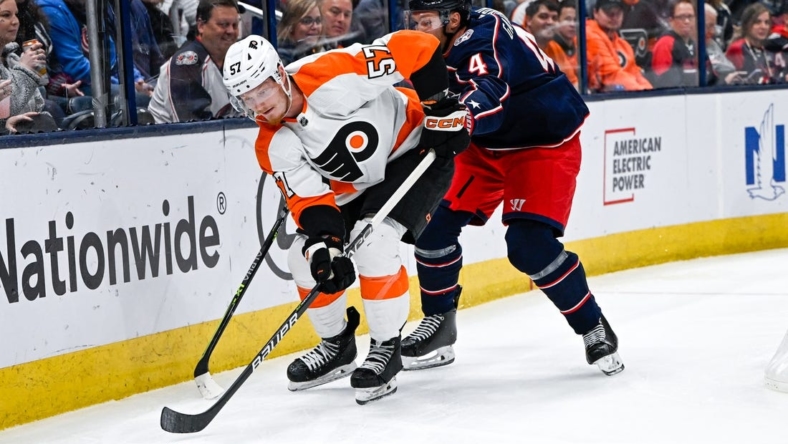 Vladislav Gavrikov scored at 3:14 of overtime to lift the host Columbus Blue Jackets, who earlier twice blew two-goal leads, past the Philadelphia Flyers 5-4 on Tuesday.

Boone Jenner added two goals and Eric Robinson contributed one goal and one assist for the Blue Jackets. Sean Kuraly also had one goal.

Blue Jackets goaltender Elvis Merzlikins made 15 saves and was replaced with Joonas Korpisalo at 12:16 of the second period. Korpisalo had 18 saves.

Travis Konecny, Kevin Hayes and Noah Cates each had one goal and one assist for the Flyers, who dropped their fourth in a row (0-3-1). Nick Seeler also added one goal for Philadelphia.

Johnny Gaudreau had two strong scoring chances for the Blue Jackets early in the first period, but Hart made two nifty saves.

Joel Farabee was active for the Flyers and fired a tough shot on goal at 9:04 before being denied.

Columbus went ahead 1-0 when Kuraly fired a shot which deflected off Justin Braun and into the net at 12:36.

Scott Laughton skated in and ripped a shot at 54 seconds of the second which was turned away by Merzlikins.

The Blue Jackets then took a 2-0 advantage when Jenner received a crisp pass from Gaudreau and scored on the power play at 5:36 of the second.

The Flyers sliced the deficit in half when Hayes connected at 8:54. Konecny gathered the puck behind the net and then found Hayes all alone in front.

Cates tied the game at 2 at 12:16. Immediately after, Merzlikins left the game with an apparent leg injury.

Jenner and Robinson scored 13 seconds apart early in the third for a quick 4-2 Blue Jackets lead.

Philadelphia closed within 4-3 when Seeler scored at 4:58. Konecny then equalized at 9:14 on the power play.