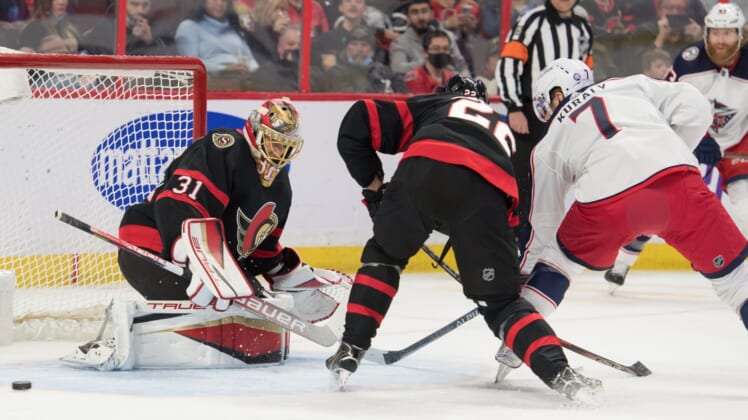 Columbus center Jack Roslovic recorded his second two-goal performance of the season to fuel the visiting Blue Jackets to a 4-1 victory over the Ottawa Senators on Wednesday.

Eric Robinson scored for the second time in as many games, Sean Kuraly also tallied and Patrik Laine and defenseman Zach Werenski each notched two assists for Columbus.

Elvis Merzlikins made 30 saves and picked up an assist for the Blue Jackets, who have won three in a row. They also avenged a 2-1 home setback to Ottawa on Jan. 23.

Tyler Ennis scored a goal and Anton Forsberg turned aside 33 shots for the Senators, who have lost eight of their past 10 games. Minutes-eating defenseman Thomas Chabot recorded an assist before exiting the game early in the second period due to an upper-body injury.

The game started off well for Ottawa as Chabot deftly sidestepped Columbus’ Yegor Chinakhov at the blue line and skated into the left circle. Chabot sent a centering feed to Ennis, who directed the puck home from in front to open the scoring at 9:48 of the first period.

Ennis, who scored his seventh goal of the season, was playing in his second game after being a healthy scratch in each of his previous five.

The Blue Jackets forged a tie nearly 4 1/2 minutes later after Werenski fed Roslovic at the back post for an easy conversion.

Werenski wasn’t done as his stretch pass from behind his goal line found Robinson at the blue line just outside the offensive zone. Robinson skated in and beat Forsberg inside the far post at 2:40 of the second period for his career-high-tying eighth goal of the season.

Roslovic swatted home a rebound of Laine’s shot from the high slot to give Columbus a 3-1 lead at 14:21 of the second period. The goal was the 12th of the season for Roslovic, who also tallied twice in the Blue Jackets’ 7-4 victory over the Buffalo Sabres on Nov. 22.

Kuraly sealed the win by scoring into an empty net with 1:37 left in the third period.