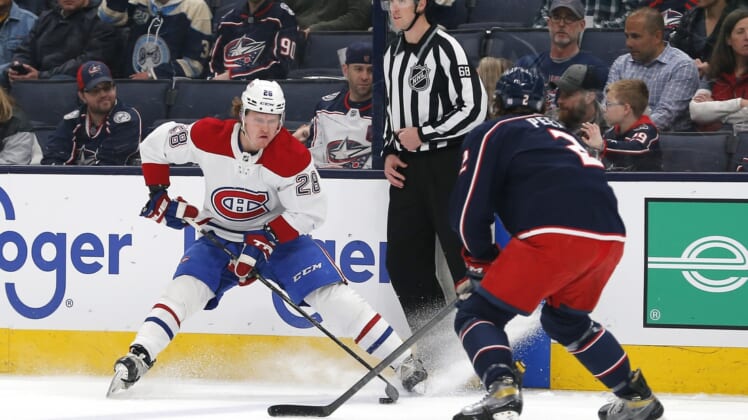 Jack Roslovic scored twice and Patrik Laine had a goal and two assists to help the Columbus Blue Jackets earn a 5-1 win against the visiting Montreal Canadiens on Wednesday.

Columbus’ Emil Bemstrom and Cole Sillinger each added a goal and an assist and Gustav Nyquist and Jakub Voracek had two assists apiece. Elvis Merzlikins made 20 saves for the Blue Jackets (35-33-6, 76 points), who have won three of their past four games to maintain their slim playoff hopes.

Roslovic gave the Blue Jackets a 1-0 lead at 8:36 of the first period. His shot from the right circle hit Montembeault’s upper body and bobbled up and over the goalie before landing and rolling across the goal line.

Roslovic doubled the lead at 15:52 of the second period. Laine carried the puck into the zone and waited before spotting Roslovic streaking down the right side, feeding him for the tap-in to make it 2-0.

Laine extended it the margin a minute and a half later on the power play. Nyquist’s redirect attempt missed the net and caromed off the end boards to Laine at the goal line at 17:22 of the second period. It was his first tally since March 19, snapping an 10-game drought.

The Canadiens made quick work of a power play of their own to get on the board at 18:09 of the middle period. After Montreal kept the puck in the zone following a faceoff win, Poehling tipped in Nick Suzuki’s shot to cut it to 3-1 just nine seconds into the man advantage.

Cole Sillinger pushed the gap to 4-1 at 6:24 of the third period when he redirected Bemstrom’s shot under Montembeault’s glove. Defenseman Nick Blankenburg, in his NHL debut, earned an assist for his first NHL point.

Columbus beat Montreal for the fifth straight meeting, including a three-game sweep of the 2021-22 season series.