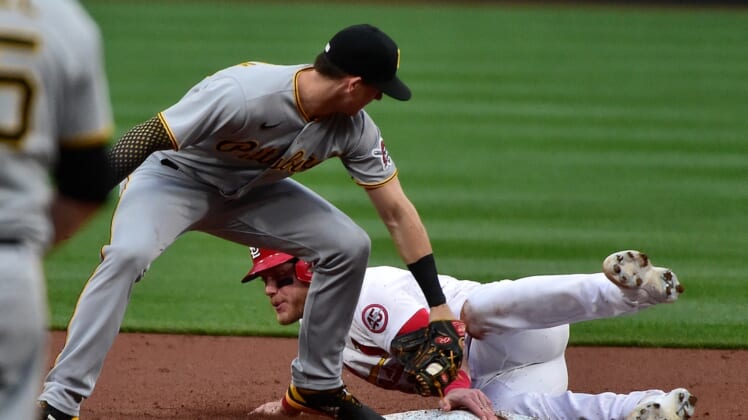 Flaherty (8-0) allowed two runs on four hits and struck out seven batters in six innings. He has allowed two or fewer runs in seven of his nine starts this season.

Alex Reyes, the fifth Cardinals pitcher, closed out the ninth to earn his 13th save.

Tommy Edman drove in three runs and Paul Goldschmidt had two RBIs as the Cardinals completed their two-game sweep. They are 5-0 against the Pirates this season.

Pirates starting pitcher Trevor Cahill departed the game with left calf discomfort with the bases loaded and nobody out in the second inning. Ultimately Cahill (1-5) allowed four runs on two hits, two walks and a hit batter.

Gregory Polanco hit a two-run homer and an RBI single to pace the Pirates offense.

The Cardinals struck first, taking a 1-0 first-inning lead on doubles by Edman and Goldschmidt.

Cahill walked Harrison Bader and Justin Williams, then hit Edmundo Sosa with a pitch to start the bottom of the second. He threw one pitch to Flaherty, then left with his injury.

Flaherty greeted Duane Underwood Jr. with a sacrifice fly, then Edman hit a two-run single up the middle to make it 4-0.

Carlson walked, then Goldschmidt and Nolan Arenado followed with RBI singles to put the Cardinals up 6-0.

Polanco’s two-run homer in the fifth inning cut the lead to 6-2.

But the Cardinals responded in the bottom of the inning. After the Cardinals loaded the bases with nobody out against Luis Oviedo, Edman hit a sacrifice fly and Carlson followed with an RBI single to push the lead to 8-2.

Bryan Reynolds hit into a run-scoring forceout against Webb, then Polanco and Ildemaro Vargas hit RBI singles to cut the lead to 8-5.