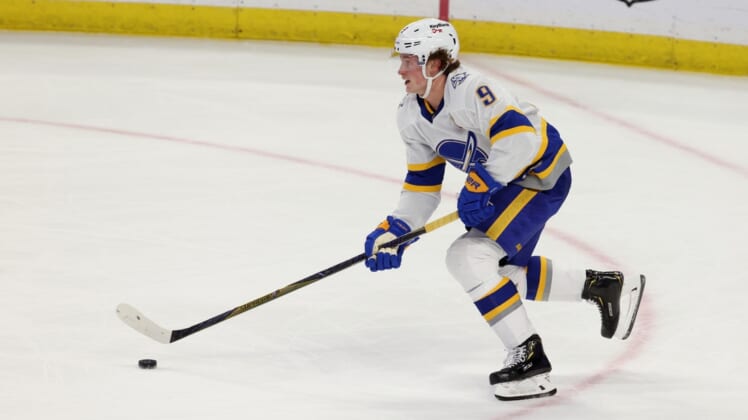 Center Jack Eichel will travel with the Vegas Golden Knights on their road trip next week, but he remains “a little ways away” from taking to the ice, coach Peter DeBoer said.

Eichel skated nine days ago in his first practice since Nov. 12 spinal surgery. He is awaiting his debut with the Knights, who acquired him in a trade with the Buffalo Sabres in November.

Eichel, 25, had been rehabilitating in Charlotte, N.C., following an artificial disk replacement in his neck.

“It’s going to be at least a month or two months before he plays,” DeBoer said Wednesday. “(Being) around the guys every day, he’s going to be coming on the road with us, on the trip at the end of the month here and start traveling with us, which provides great team-building opportunities.”

It was the latest potential timeline provided by a team official. Last Friday, Golden Knights owner Bill Foley said in an interview that Eichel could play in “a few weeks” — a date DeBoer seemed to dispute.

“I wouldn’t say there’s really a target date at this point,” Eichel said. “I think it’s … see how you feel and see how you progress and how confident and comfortable you are. I think at that point, you’ll know.”

Eichel was traded to Vegas from Buffalo on Nov. 4 following a lengthy holdout, after he had clashed with Sabres management about his health care. He was adamant about having the artificial disk replacement, while Buffalo wanted him to have fusion surgery to repair his herniated disk.

Eichel is in the fourth year of an eight-year, $80 million deal. The Golden Knights reportedly absorbed his $10 million cap hit for the current season.