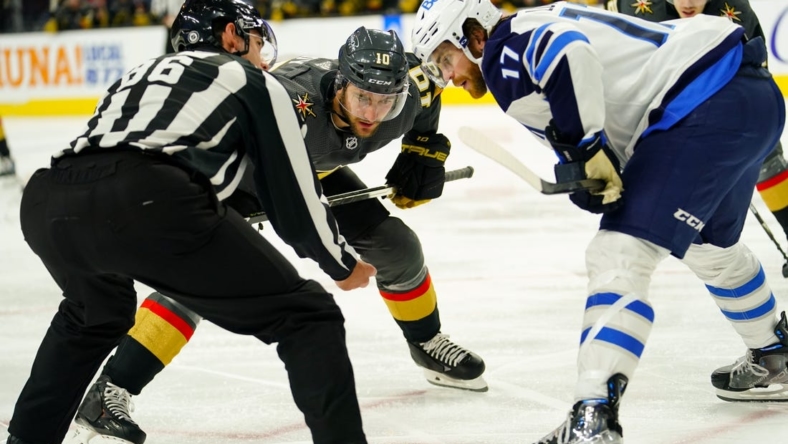 Jack Eichel scored with seven seconds remaining in overtime to give the host Vegas Golden Knights a 2-1 victory over the Winnipeg Jets on Sunday.

Eichel broke down the left wing and then cut in front of the crease with Mark Scheifele shadowing him and tucked the puck inside the right post past Connor Hellebuyck for his fourth goal of the season.

Hellebuyck made a season-high 46 saves and Adam Lowry scored for Winnipeg, which had a three-game winning streak snapped.

Vegas held Winnipeg to just four shots on goal in both the first and second periods while outshooting the Jets 33-8, but couldn’t get a shot past Hellebuyck.

The Golden Knights dominated the first period with an 18-4 edge in shots on goal, but Hellebuyck, the 2020 Vezina Trophy winner, made a number of top-tier saves, including a highlight-reel special on Nicolas Hague’s shot at a wide-open left side of the net. Hellebuyck, situated by the right post, made the save by reaching behind and extending his stick out, deflecting the shot away with the shaft of the stick.

Hellebuyck got some help from the goalpost later in the period on a two-on-one that saw Brett Howden fire a close-in shot off the left post.

Vegas was also denied midway through the second period when Jonathan Marchessault’s backdoor shot from the left side of the goal clanged off the far post and slid across the front of the goal line.

Lowry then gave Winnipeg a 1-0 lead just 13 seconds into the third period, backhanding a rebound of Neal Pionk’s blast from the right point inside the right post for his second goal of the season.

Stone tied things seven minutes later when he batted in his own mid-air rebound from the right side of the net for his third goal of the season.

Hellebuyck kept it tied at 1-1 with 28 seconds left in regulation when he stopped Nicolas Roy, who broke in alone and attempted a backhand try.