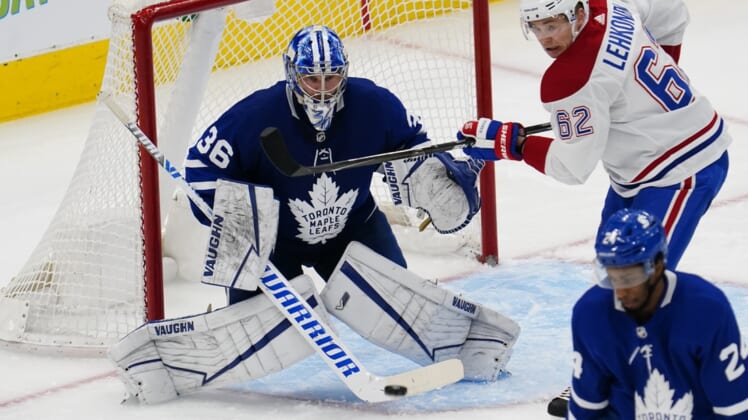 Zach Hyman and Auston Matthews each had a goal and an assist on a milestone night for Jack Campbell as the Toronto Maple Leafs recorded a 3-2 win over the visiting Montreal Canadiens on Wednesday.

Campbell stopped 32 of 34 shots, improving his record to a perfect 10-0-0. The ten-game winning streak is the longest by a goalie in Maple Leafs franchise history, and it ties an NHL record for longest win streak to start a season.

The Leafs have won five straight games and haven’t lost in regulation (8-0-1) over their last nine games.

T.J. Brodie also scored for Toronto. It was Brodie’s first goal of the season and first since joining the Maple Leafs as a free agent last October.

Corey Perry scored both of Montreal’s goals for his first multi-goal outing of the season.

Matthews and Perry each scored within the first 2:15 of the first period, as both the Leafs and Habs each converted their first shots.

Fifty-four seconds into the game, Matthews took the puck around Montreal’s net and fired it past Jake Allen for the star forward’s 28th goal of the season. Matthews has scored in each of his last three games, and has 12 points (seven goals, five assists) in his last eight games.

Montreal responded just 81 seconds later. Perry took a pass from Nick Suzuki and made a nifty move in front of net for the close-range wrist shot.

Despite outshooting the Maple Leafs by a 17-4 margin in the second period, the Habs couldn’t score the go-ahead goal. Jonathan Drouin had perhaps Montreal’s best chance on a partial breakaway in the final minute of play, but Campbell made the save.

The Canadiens’ inability to capitalize on that second-period pressure proved critical, as the Maple Leafs’ offense re-emerged. Brodie and Hyman each scored within the first 11 minutes of the third period.

Toronto is 4-1-0 in five games against Montreal this season.