Fan heckling has its limits, and Ja Morant's parents were unfortunately witnesses to the worst of it while their son scored 47 points in an NBA playoff game.

Matt Fitzgerald
May 26, 2021; Salt Lake City, Utah, USA; Memphis Grizzlies guard Ja Morant (12) moves to the basket against the Utah Jazz during the second half in game two of the first round of the 2021 NBA Playoffs at Vivint Arena. Utah Jazz won 141-129. Mandatory Credit: Chris Nicoll-USA TODAY Sports

Memphis Grizzlies guard Ja Morant scored 47 points in Wednesday’s Game 2 loss to the Utah Jazz, but as spectacular as that individual performance was, it’s somewhat overshadowed by the fact that Morant’s parents were hatefully heckled that night.

ESPN’s Tim MacMahon reported the details of how Morant’s father and mother were harassed in Utah as their prodigious son torched the Jazz’s elite defense:

Jazz All-Star Donovan Mitchell expressed his support for the Morant family on Twitter after hearing of the unsavory news:

Unfortunately, this isn’t the first notable instance of fans speaking or acting out of turn, and it’s an issue that’s increasingly coming to the forefront as the NBA postseason unfolds.

Bear in mind there’s quite a lot of things fans can say and do to avoid trouble. Even Morant’s father, Tee Morant, acknowledged Jazz security did a fine job removing fans, and that he could carry on trash talking with more respectful spectators nearby the rest of the evening.

Nevertheless, this is an issue that isn’t going away, and needs to be dealt with more directly so that things don’t escalate too much. 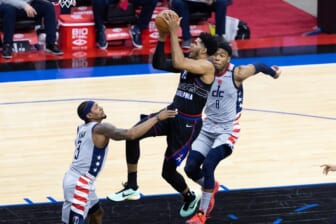 Brooklyn Nets superstar Kyrie Irving suggested that he might encounter racist heckling upon his return to Boston to take on the Celtics in Game 3.

Instead of advancing that conversation further and addressing a potential underlying issue that doesn’t seem like a bunch of unrelated, isolated incidents, Celtics president Danny Ainge was dismissive of Irving’s remarks.

After exiting the Washington Wizards’ playoff game with an ankle injury, Russell Westbrook got yelled at and had popcorn dumped on him by a fan as he entered the tunnel for the locker room. Westbrook had to be restrained from racing into the stands and confronting the fan. 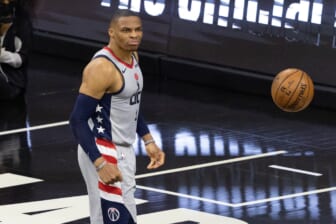 Whatever the fans’ motivations are for going after these players and their loved ones — at best, trying to ensure that their desired team wins — there are lines that can’t be crossed. However, in the NBA, it seems like those lines are routinely disregarded, and fans are given free rein to behave as grossly as they please.

Instead of talking about how well the Philadelphia 76ers are playing as the East’s top seed, or appreciating how competitive the Grizzlies are making their series against the Jazz, things like Westbrook getting popcorn thrown at him and, now, this awful conduct by Utah fans are stealing headlines.

The hope is by covering these types of stories enough, with the fans responsible punished adequately and exposed, that NBA arenas will be a little less hostile.