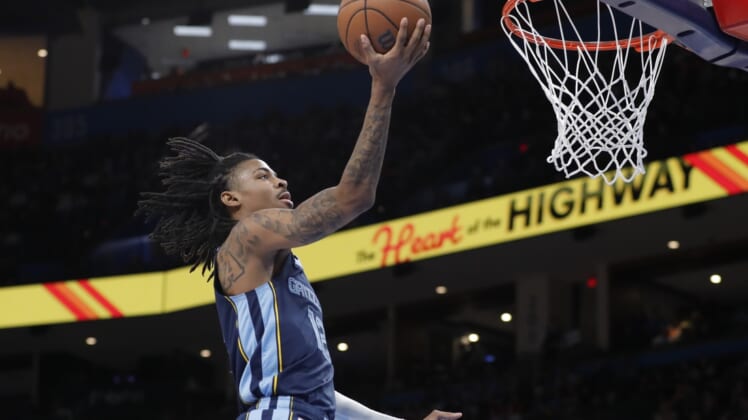 After missing one game due to back soreness, Memphis star Ja Morant is expected to be available when the Grizzlies continue their four-game road trip against the Atlanta Hawks on Friday.

Morant is averaging 27.5 points on 49.3-percent shooting for Memphis, which has won four straight games to move ahead of the Golden State Warriors into second place in the Western Conference standings.

Friday’s contest features a matchup of two of the top scorers in the league in Morant and Hawks star Trae Young, who is fifth in scoring at 28.0 points per game. Morant is seventh.

Young was limited to a season-low nine points on 3-of-12 shooting in Wednesday’s 116-106 loss to the Charlotte Hornets.

“They did it really more than any team has done it probably this year,” Young said. “They were on it from the beginning. It’s kind of frustrating obviously, you want to play. I want to play basketball, but if they’re doubling me, I have to make the right plays, get it out or just try to make a play for somebody else. Sometimes it’s frustrating, but it’s a part of playing this game at a high level and being one of the best players.”

The loss snapped a three-game win streak for Atlanta, which fell to 10th in the Eastern Conference standings with 13 regular-season games remaining.

The Hawks are looking to sweep the season series against Memphis after winning 132-100 on Nov. 26. Young scored 31 in the victory, while the Grizzlies struggled after Morant exited in the first quarter with a left knee sprain.

The Grizzlies had little trouble without Morant on Tuesday, when they cruised to a 135-102 win over the Indiana Pacers.

Desmond Bane scored 21 points and Jaren Jackson Jr. added 19 for Memphis, which shot 51.4 percent and recorded 38 assists on 54 made baskets.

“We shared the ball,” Grizzlies guard Tyus Jones said. “We played fast. We played with pace. We played unselfish basketball. Instead of taking a good shot, we created for someone else to have a great, wide-open shot. We had everything clicking on both ends of the floor.”

The balanced Grizzlies roster features plenty of depth in the backcourt. De’Anthony Melton scored 18 points in Tuesday’s win, and Bane is averaging 20.7 points while shooting 50 percent from 3-point range over his last seven games.

Memphis ranks fourth in the NBA in scoring at 114.7 points per game and faces a similar opponent in Atlanta, which averages 112.8 points.

The Hawks have received a boost this month from forward De’Andre Hunter, who made four 3-pointers and finished with 21 points against Charlotte on Wednesday. The third-year pro is averaging 18.0 points over his last eight games.

Atlanta will need another strong outing from Hunter on Friday if Danilo Gallinari is unavailable. The team’s starting power forward exited Wednesday’s game after suffering a right biceps contusion in the first half. He is day-to-day.