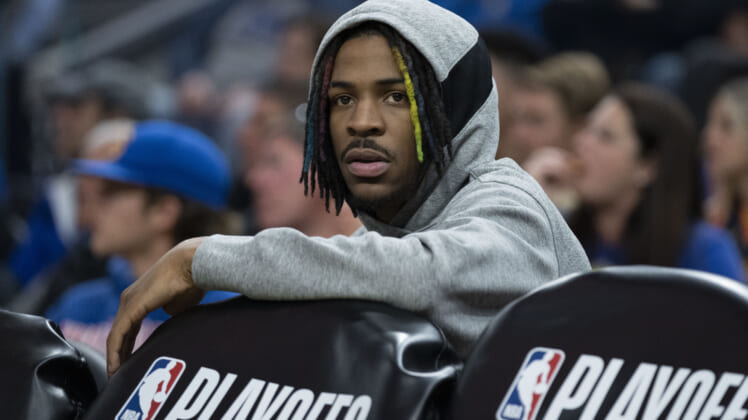 The knee injury Memphis Grizzlies star Ja Morant suffered during Game 3 of their Western Conference Semifinals series against the Golden State Warriors added to the drama between the two teams.

Morant was sidelined in the fourth quarter of a game that the Warriors won by the score of 142-112 to take a 2-1 series lead.

According to the Grizzlies, Morant’s injury occurred when Warriors star guard Jordan Poole took a swipe at his knee. While there’s some ambiguity regarding this, we have an update on Morant’s injury. It’s not great.

According to Shams Charania of The Athletic, Morant suffered a bone bruise in his left knee and is doubtful for the remainder of the NBA Playoffs.

Without Morant in the mix for Game 4 in San Francisco Monday evening, the Warriors were able to overcome a double-digit fourth-quarter deficit to take a 3-1 series lead heading into Game 5 on Wednesday.

The backdrop here is a continued belief from Memphis’ brass that Poole’s actions led to the injury.

“Jordan Poole actually grabbed his knee and yanked it, which kind of triggered whatever happened. So I am actually going to be very curious to see what happens after that.”

Here’s the play in question.

Morant would actually remain in the game, only to exit after apparently injuring himself closing out on a Klay Thompson three-point attempt later in the fourth quarter.

Regardless of our opinion regarding how Morant was injured, it adds just another layer to what has been a physical and drama-filled series between the two Western Conference rivals.

Back in Game 1, Draymond Green was ejected for a hard foul on Grizzlies big man Brandon Clarke. Game 2 saw Memphis forward Dillon Brooks commit a hard foul on Gary Payton II — leading directly to the Warriors’ guard suffering a season-ending elbow injury. Brooks was ejected from that game and suspended for the next outing. In Game 3, Grizzlies wing Kyle Anderson was also ejected for arguing with officials.

Impact of Ja Morant injury on remainder of the series

With Morant sidelined Monday evening, Memphis played some great basketball. It was actually up 12 at one point in the fourth quarter before Stephen Curry took over to the tune of 18 points in the final stanza.

For Memphis, the game was clouded by struggles on the part of Dillon Brooks and an inability to contain Curry late. For his part, Brooks must play at a higher level offensively if the Grizzlies want to extend this series past five games.

Memphis finds itself as big home underdogs against the Warriors heading into Game 5 Wednesday evening.

The team has proven to be resiliant throughout what has been a great 2021-22 season. We wouldn’t put it past the Grizzlies to come out on top Wednesday and force a Game 6 Friday in San Francisco.

However, that’s going to be a difficult task with Ja Morant sidelined.