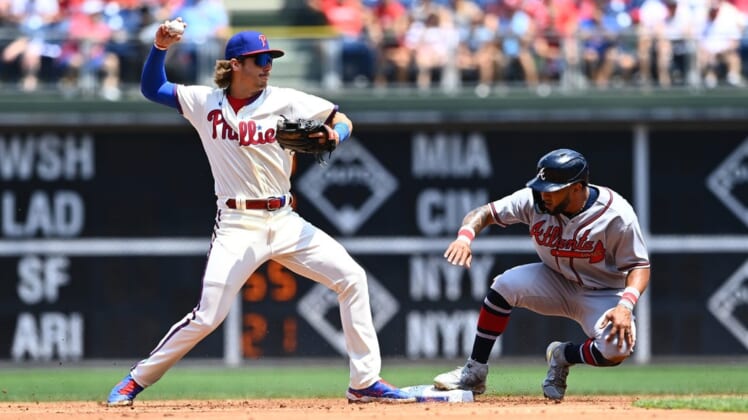 J.T. Realmuto and Alec Bohm each had two hits and two RBIs to help the Philadelphia Phillies to a 7-2 win against the visiting Atlanta Braves in the rubber contest of their three-game series on Wednesday afternoon.

Kyle Gibson (6-4) allowed two runs and four hits in six innings for Philadelphia, which had lost four of five coming out of the All-Star break. He struck out four and walked two.

Neither team put a runner in scoring position until Darick Hall singled with one out in the fourth for Philadelphia to put runners on first and third, but Nick Castellanos grounded into a 6-4-3 inning-ending double play.

Two errors by the Braves helped Philadelphia score five runs in the sixth.

Bryson Stott walked to start the inning and then scrambled to third on an errant pickoff throw by Morton.

Bohm, who came in hitting .416 in his previous 21 games with 12 RBIs, singled to left to score Stott for a 1-0 lead, extending his hitting streak to 12 games.

Atlanta second baseman Robinson Cano committed an error on a ground ball by Didi Gregorius, and Odubel Herrera brought home Bohm with an RBI single to left to make it 2-0.

Kyle Schwarber followed with a sacrifice fly to center for the first out of the inning and a 3-0 lead.

After another walk and a double steal, Realmuto came through with a two-run single to stretch the lead to 5-0.

Olson, who came in 8-for-18 in his career off Gibson with three home runs, blasted his 20th of the season in the sixth with a runner aboard to cut the lead to 5-2.

The Phillies got the runs back in their half of the sixth when Castellanos doubled to lead off the inning and came home on a one-out double by Bohm to make 6-2. Bohm later scored on a sacrifice fly by Gregorius for a 7-2 lead.