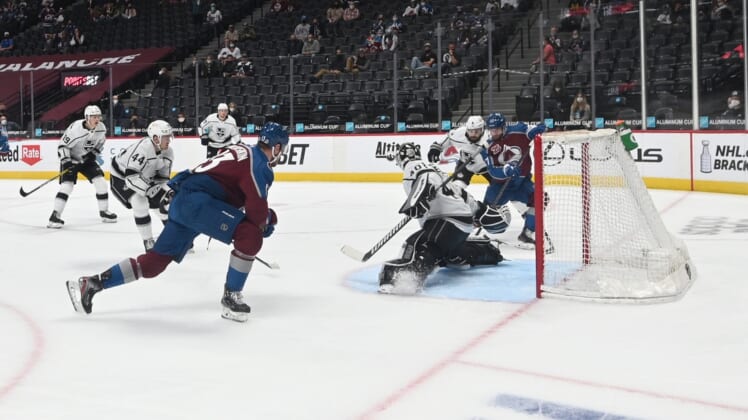 J.T. Compher tallied his first career hat trick and the Colorado Avalanche inched closer to securing the top seed in the West Division with a 6-0 win against the Los Angeles Kings in Denver on Wednesday night.

Colorado (38-13-4, 80 points) can secure first place in the West with a win against the visiting Kings on Thursday night in the regular-season finale for both teams.

Gabriel Landeskog had a goal and an assist, Mikko Rantanen had three assists, and Philipp Grubauer made 18 saves for his seventh shutout of the season, tying Semyon Varlamov of the New York Islanders for the NHL lead.

The Avalanche scored three goals late in the first period and three more in the second to build a 6-0 lead.

Joonas Donskoi scored 15 seconds into a power play to give Colorado a 1-0 lead at 14:43 of the first.

Pierre-Edouard Bellemare pushed a loose puck through the pads of Petersen to make it 2-0 at 16:02, and Compher scored with 45 seconds left in the period for a 3-0 lead.

Defenseman Sean Walker hit the crossbar at 17:05 of the first period, but the Kings did not have a shot on goal the first 18:39.

Compher scored his second goal at 4:16 of the second period to stretch the lead to 4-0.

Compher has 10 goals, putting him in double figures for a fourth straight season.

Colorado played without Nathan MacKinnon, who leads the Avalanche with 65 points. He was injured against the Vegas Golden Knights on Monday and will also miss Thursday’s game against the Kings.

He’s expected to be ready for the Stanley Cup playoffs.