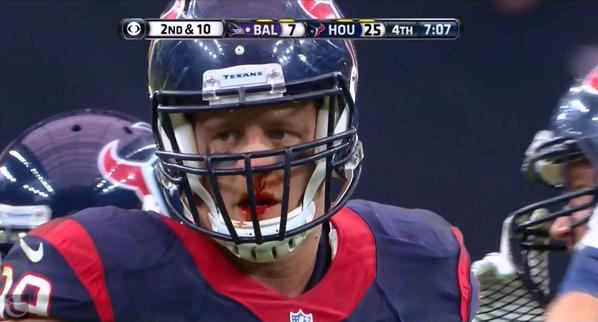 Houston Texans defensive end J.J. Watt is a legitimate MVP candidate. What he has done thus far this season is nothing short of extraordinary.

As the leader of the Texans squad both on and off the field, Watt has his team in position to potentially sneak into the AFC Playoffs as the sixth seed.

He’s also bloodied himself on multiple occasions, the most recent coming Sunday in an impressive Texans win over the Baltimore Ravens.

For those of you who didn't know, @JJWatt grew up in Wisconsin playing hockey. Certainly looked the part today. #NFL pic.twitter.com/FOxv3FBRga

Watt is taking this whole “no guts, no glory” thing to an entirely new level. He goes 100 percent 100 percent of the time, and has made as much of a difference for his team as any player in the league.