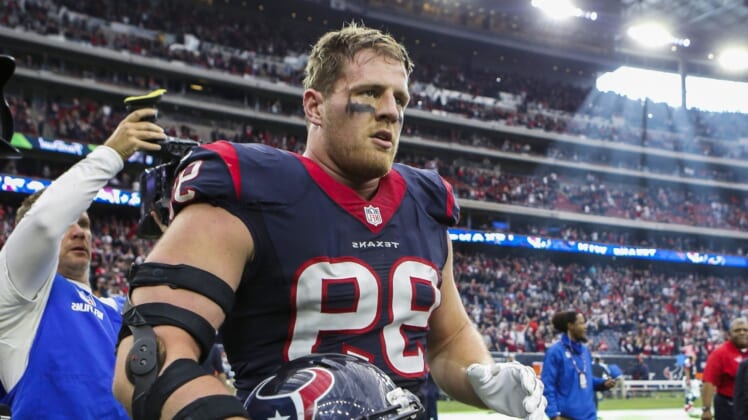 When the Houston Texans sent DeAndre Hopkins packing in a stunning trade, the move was widely ridiculed. J.J. Watt has now entered the chat room.

Though he wouldn’t openly criticize his team for making the trade, Watt’s comments on the matter (via Jimmy Traina of SI.com) are eye-opening.

Not surprisingly, Watt views Hopkins is one of the best receivers in the NFL. When asked how shocked he was that Hopkins was traded to Arizona, Watt gave a diplomatic answer.

“Anytime you have a guy like Hop, who in my opinion, has the best hands in the game and is obviously one of the top receivers of the game, it certainly catches your eye, that’s for sure,” Watt said. “It’s always tough to lose a guy like that, no matter what the situation is.”

Losing Hopkins — especially given the team’s paltry return in the trade — certainly was tough. In fact, Deshaun Watson has indicated he’s none to pleased about the development.

Watt again showed diplomacy continuing in his response, saying the move was “above my pay grade.”

“So as a player on the team, I do my job and I go to work and I play the games, and the G.M. and the owners, they do their job and they try and do what they feel is best for the team. And so, all I can do is show up and go to work and hope that all the guys that we have are great contributors to our team.”

Others have not been as guarded with their tongues regarding the Hopkins trade.

The Texans were a better team with Hopkins on the roster. Nobody can argue against that. Now, they’ll have to move on without him, as Watt said.

It’s going to be fascinating to see how the Texans perform in 2020 without their star receiver.