J.J. Watt’s great-grandmother so proud of him she wore his jersey to church 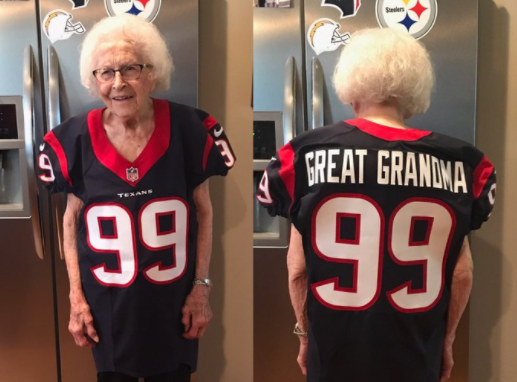 If you’ve been keeping tabs on J.J. Watt lately then you know he’s been working tirelessly to help assist in the Hurricane Harvey relief effort.

After starting out asking people to help him raise $200,000, Watt’s YouCaring account has raised over $31 million the past two weeks. He’s also organized truckloads worth of relief help and has been a beacon of hope to many in the greater Houston area in the wake of Hurricane Harvey.

Not surprisingly, Watt’s great-grandmother Sophie Musial is extremely proud of him. So proud, in fact, that she went to church wearing a No. 99 jersey with the name “Great Grandma” on the back where “Watt” would normally be.

.@JJWatt's 99 year old great-grandmother Sophie Musial is so proud she even wore her 99 jersey to church this morning. $31 million raised! pic.twitter.com/qxS2ewiGrE

J.J. Watt and the Houston Texans are hosting the Jacksonville Jaguars Sunday.

As fate would have it, they’re also going to be helping the Jags out by hosting them after the game as Hurricane Irma roars up the coast of Florida.