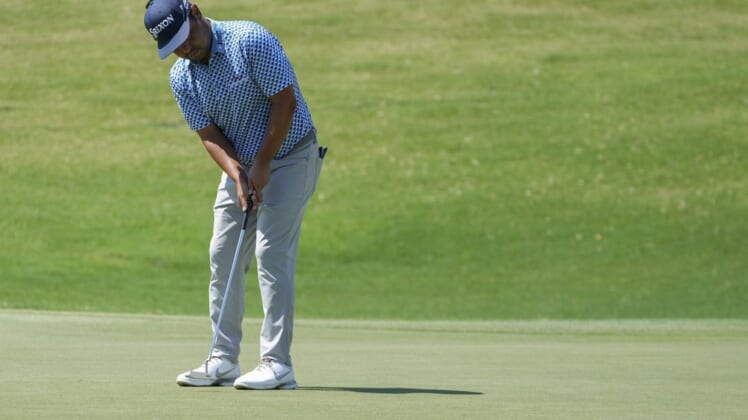 J.J. Spaun shot a 2-under 68 on Saturday to maintain a one-shot lead after three rounds of the FedEx St. Jude Championship in Memphis, Tenn.

Austria’s Sepp Straka also fired a 68 and is in second place. Spaun sits at 13-under 197 after three trips around TPC Southwind.

Will Zalatoris roared up the leaderboard with a 5-under 65. He is tied with Trey Mullinax (66) and Australia’s Cameron Smith (67) for third at 11 under.

Spaun had three birdies and one bogey as he chases his second career PGA crown. The San Diego State product won the Valero Open in April and now holds or shares a third-round lead for the third time in his career.

Spaun said he will have to play much better on Sunday to win the tournament.

“I know I’ve got to play better than I did today tomorrow,” Spaun said. “You look at the names, I mean, those guys, major champions and multiple winners and you’ve got really hot golfers that are, you know, just playing really good. It’s not going to be easy tomorrow and I don’t think if I play like how I did today, like I don’t think that will be enough.

“I’m just going to give it all I’ve got and hopefully make some more birdies than I did today and we’ll see what happens after we add them up.”

Straka, who missed six straight cuts prior to his success this week, had five birdies and three bogeys. The Austrian had a chance to be tied for the lead, but he missed a 9-foot par putt on No. 18 for a bogey.

“It was a lot of good, a lot of bad, but overall I’m pretty happy with it,” Straka said of his round. “I hung in there nicely, got up and down a couple times when I needed to and yeah, I was able to convert the few birdies putts that I had.”

Zalatoris had six birdies and one bogey as he followed up Friday’s 63 with another strong round.

Four of the birdies came on a six-hole stretch on the back nine as Zalatoris quickly moved into contention.

“I love this golf course,” Zalatrois said. “Even though I guess 11 under’s leading right now, it will probably get to 13 or 14 would be my guess. You can make a mistake real quick, but you can also have some birdie looks out here.

“You know, I love playing this place. I played well here last year and got some good vibes running around this place.”

Zalatoris finished at 12 under last year when he tied for eighth in Memphis.

Of course, Zalatoris remains without a victory in PGA Tour play. He lost twice in playoffs earlier this year.

Zalatoris was second in The Masters in 2021 and the PGA Championship this year. He also tied for second at this year’s U.S. Open.

Now he feels he’s close to breaking through.

“I think it’s a comfort level,” Zalatoris said. “I played on the biggest stages in the majors and I felt comfortable in those positions. Obviously I haven’t gotten a win out of it yet. Eventually we will and hopefully tomorrow it is.”

Mullinax carded five birdies and a bogey on Saturday, while Smith had five birdies against two bogeys. Smith will overtake Scottie Scheffler — who missed the cut — for No. 1 in the world if he wins this tournament.

“I knew that I felt comfortable around here,” said Smith, “which I think is a massive confidence boost.”

Troy Merritt shot 70 to drop from a tie for second to a sixth-place tie with Tyler Duncan (67).

Merritt had four birdies and four bogeys on Saturday.