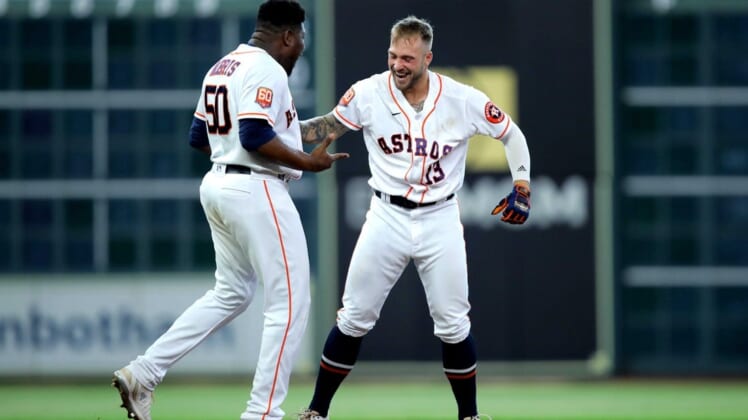 Rookie J.J. Matijevic’s pinch-hit RBI single with two outs in the ninth inning lifted the host Houston Astros to a 3-2 win against the New York Yankees in the opener of a day-night doubleheader on Thursday afternoon.

The Astros earned their fifth walk-off win after fill-in closer Hector Neris faltered in the top half. Called upon after Ryan Pressly was placed on the paternity list before the game, Neris (3-3) was one out away from getting the save before pinch hitter Isiah Kiner-Falefa hit a tying single to score Aaron Hicks.

After Neris kept the game tied, Alex Bregman began the winning rally with a single off Michael King (6-3) and moved to third on a double to the left field wall by Aledmys Diaz. The Yankees pulled their infield and outfield in and with one out they intentionally walked pinch hitter Yordan Alvarez.

Following a strikeout by Chas McCormick, Matijevic batted for rookie Korey Lee. He hit a 1-1 pitch to the shortstop and second baseman Gleyber Torres, who was shifted into right field, was unable to cover second in time when Kiner-Falefa tried to get the forceout.

Bregman hit an RBI single in the first and Lee produced a run-scoring double in the second as the Astros won for the 24th time in 33 games and beat the Yankees for the fourth time in six meetings this season.

DJ LeMahieu homered in the fifth as New York lost for the sixth time in nine games. The Yankees have yet to hold a lead against Houston this season as their two wins came via walk-off hits by Aaron Judge.

Houston’s Cristian Javier allowed a run and two hits in five innings while not showing the same dominance as his combined no-hitter in New York last month. He struck out three, walked four and allowed a baserunner in four of his five innings.

Javier escaped a bases-loaded jam in the third when Matt Carpenter lined into a double play and Torres flied out.

New York’s Jordan Montgomery allowed two runs on seven hits in 6 1/3 innings. The left-hander struck out eight and walked one.