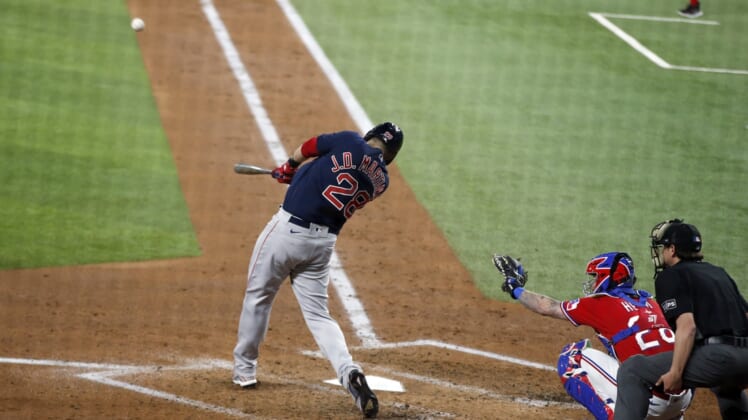 Martinez, who was originally not expected to play after exiting Thursday’s series opener due to migraine symptoms, had three hits and four RBIs to complete a monster month of April as the Red Sox won for the fourth time in five games.

Martinez enters May hitting .351 with major-league-leading totals in home runs (nine) and RBIs (25).

Brock Holt had two hits and an RBI for the Rangers, who have dropped six of eight.

Bogaerts stepped in next and lined a cutter over the wall in left-center for a 4-0 edge.

Arihara retired the side in order on seven pitches in the second, and the Rangers got on the board in the bottom of the frame on Holt’s two-out RBI single.

Boston’s bats heated up in the third. Martinez, this time leading off the inning, went deep once again, and Devers took a changeup out to the opposite field one out later for a 6-1 advantage.

Arihara (2-3) was pulled after hitting a batter later in the frame. He gave up six runs on four hits — all homers — and two walks over 2 2/3 innings, striking out one.

Red Sox starter Nathan Eovaldi, meanwhile, held the Rangers’ bats quiet, pitching out of two-on jams in the second and fourth innings. He completed his night with a 1-2-3 sixth inning.

Eovaldi (4-2) allowed one run on four hits and two walks, punching out five.

Texas failed to advance a runner into scoring position after the fourth inning until Holt advanced to second on defensive indifference with two outs in the ninth.