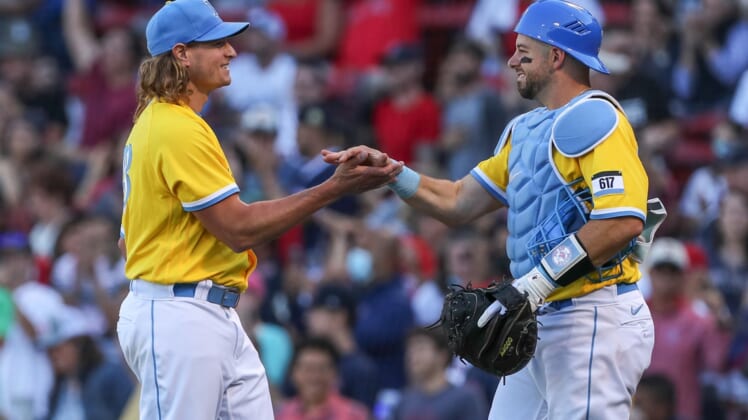 J.D. Martinez homered and Enrique Hernandez and Kevin Plawecki each drove in two runs as the Boston Red Sox recorded an 8-6 win over the visiting Baltimore Orioles 8-6 on Sunday.

Hunter Renfroe and Rafael Devers each had two hits and drove in a run for Boston (86-65), which has won five in a row overall. The Red Sox also have won 12 of their last 13 meetings against Baltimore and hold the top wild-card spot in the American League with 11 games remaining.

Hirokazu Sawamura (5-1) earned the victory despite allowing two runs in the seventh inning. Sawamura entered the game after Garrett Whitlock exited with a pectoral injury.

Garrett Richards worked around a two-out single in the ninth inning for his third save.

Baltimore (47-102) trailed 4-0 after two innings but moved ahead 6-5 in the top of the seventh on Trey Mancini’s three-run double off Sawamura.

Austin Hays drove in two runs for the Orioles, who have lost eight of their last nine games.

Boston reclaimed the lead with three runs in the bottom of the seventh inning. Jose Iglesias sparked the rally with a one-out double off Conner Greene (1-1) and tied the game when he scored on Hernandez’s single.

Renfroe put the Red Sox ahead with an RBI double off the left-field wall. Devers followed with a single up the middle, allowing Renfroe to score easily from second.

Hernandez extended the lead with an RBI double in the second before Baltimore scored three runs in the third against Nathan Eovaldi.

Hays delivered a two-run single with two outs off Eovaldi, who allowed three runs on seven hits over five innings. He walked one and struck out eight.

Martinez put Boston ahead 5-3 in the third with a one-out solo blast, his 27th of the season.

Ryan Mountcastle and Richie Martin had two hits apiece for Baltimore, which is 6-12 this month after going 4-24 in August.