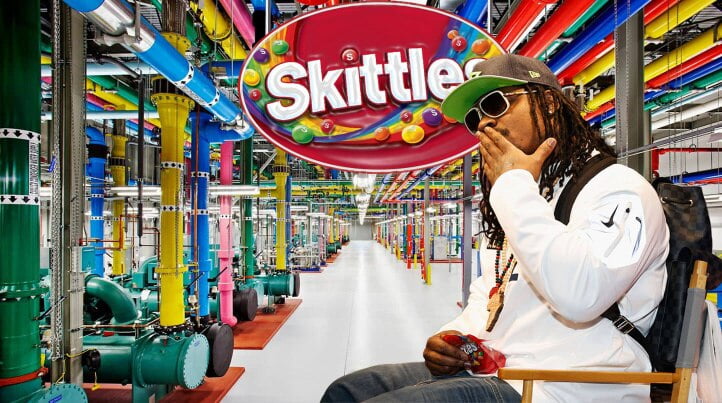 The Oakland Raiders may have not made it far enough to play in Super Bowl LI, but Marshawn Lynch is taking part as a pitchman for – what else – Skittles.

It’s the Super Bowl season which means it’s time for the Super Bowl television commercial contest to begin. And even though his teammates may be at home this offseason, Raiders running back Marshawn Lynch is already playing in advertising’s big day.

Lynch’s sideline snack of choice enlisted the star player to help with the promotion of its one-of-a-kind Super Bowl ad with a spectacularly brilliant – and buzzworthy – social media campaign to build excitement before the game on Sunday, February 5th in Minneapolis.

The reclusive (at least with the media) Lynch jumped in with Skittles after they held a “contest” to show their Super Bowl ad to an audience of one. Yes, Skittles won’t air the commercial during the game (although that remains to be seen), instead airing it to one lucky Skittles Twitter fan.

The lucky fan is teenager Marcos Menendez from Canoga Park, California. The same Mendoza who just happened to join Twitter this month. (Wink-wink!). Sure, Mendoza may be an advertising phantom (we think!), but once Menendez was notified, Lynch jumped in and sent the teen his personal cell phone (again – wink, wink!) right on Twitter. Here’s the exchange:

Definitely best picture of me ever taken in this new @skittles commercial #mostexclusivead pic.twitter.com/nqSo58fsIx

The number Lynch posted on Twitter responds to text messages and you can even call it. Here’s audio from a call to the number:

The campaign is a smart one to cut through the clutter of a crowded marketplace during the big game. According to Ad Age magazine, ad spending for commercials during Super Bowl LI’s broadcast on Fox will total a record $385 million.

The big question will be if the Raiders Lynch will make an appearance either on television, or in the company’s Facebook Live feed of Menendez watching the ad by himself. Either way, what started off as the enigmatic running back enjoying his favorite candy on the sidelines during his days as a Seahawks ball carrier, has led to one of the more unique Super Bowl ad campaigns we’ve seen in quite a while.

Kudos to Skittles and Lynch for having fun with the ad world’s biggest day.