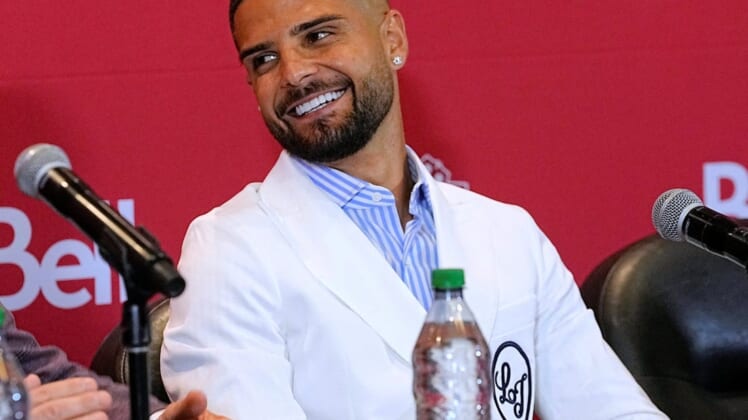 Charlotte FC is on a high after a midweek friendly against a soccer power.

Toronto FC is hoping for some power of their own with the debut of two big-name talents Saturday.

Charlotte FC (8-11-2, 26 points) defeated England’s Chelsea FC on penalty kicks Wednesday, in a victory that came after they leveled the score 1-1 on a penalty in the second minute of second-half stoppage time.

In their most recent MLS contest, Charlotte FC saw a 2-0 lead turn into a 3-2 loss at Inter Miami on Saturday. It was the first time they conceded more than two goals since their season opener, yet still they sit eighth in the Eastern Conference, just below the playoff line.

“We need to fight for going as far as possible on the table because we want to have a chance to arrive to the playoffs, at least to be with a fighting chance,” interim coach Christian Lattanzio said.

Lattanzio made some adjustments to his formation against Chelsea, with Kamil Jozwiak seeing time as an attacking midfielder rather than his usual spot as a winger.

“I wanted to see Kamil in that position because I think he has characteristics that can adapt well to that part of the game, in terms of dynamism, in terms of the press and what we’re trying to do,” Lattanzio said.

It will be a big night for Toronto (5-12-4, 19 points) as Italian internationals Lorenzo Insigne and Federico Bernardeschi are set to play in an MLS game for the first time.

Insigne, who arrives from Serie A power Napoli, likely won’t play a full 90 minutes after working his way back from a calf injury sustained while training with the Italian national team.

“Both are excited, and everybody’s excited to get them going,” Toronto coach Bob Bradley said. “We’ll have to figure out exactly what it means in terms of minutes and things like that, but both of them are ready to go.”

Each signed four-year contracts with Toronto.

“I think it shows that some of the things that have been worked on are going in a good direction,” Bradley said.

The Reds find themselves second-to-last in the Eastern Conference standings. The club is 0-4-1 in its past five games and has been shut out in three of their past four games, including two straight.