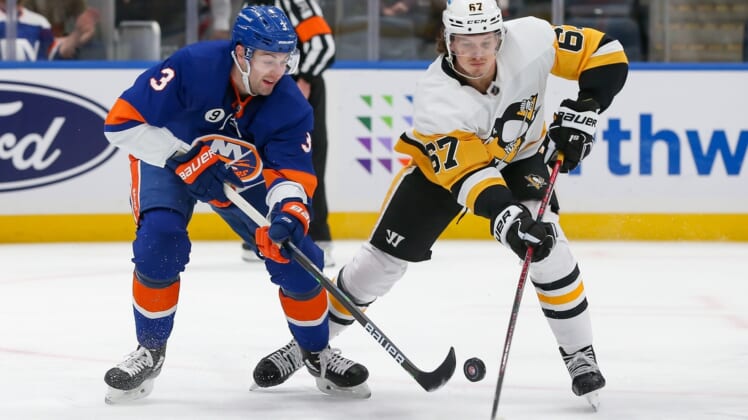 Ilya Sorokin made 43 saves and Kyle Palmieri scored the only goal of a shootout as the New York Islanders recorded a 5-4 win over the Pittsburgh Penguins on Tuesday in Elmont, N.Y.

Zach Parise and Josh Bailey each scored twice during regulation for the Islanders (34-29-9, 77 points), who kept their slim playoff chances alive with their sixth win in the past eight games.

The Penguins (42-22-11, 95 points) could have clinched a playoff berth with a regulation win on Tuesday. Pittsburgh is 1-4-1 in its past six games.

Jake Guentzel had two goals and an assist for the Penguins, while Sidney Crosby and Rickard Rakell each had two assists. Jeff Carter and Danton Heinen scored Pittsburgh’s other goals.

The Penguins lost both Bryan Rust and Evan Rodrigues to undisclosed injuries. Rust left after just 1:06 of ice time early in the first period, while Rodrigues headed to the locker room during the second period.

Guentzel gave Pittsburgh the early lead 5:52 into the first period, but the Islanders responded with three goals before the first intermission. Two of those scores came from Parise, via some strong work from both sides of the special-teams units.

Bailey scored in the final minute of the opening frame to give New York a 3-1 lead. However, the Penguins responded by outshooting the Islanders 19-7 in the second period, bookending the frame with goals from Heinen and Guentzel to level the score.

The see-saw action continued early in the third period, as Bailey restored New York’s lead at the 2:49 mark. Three minutes later, Carter drew the Penguins even again on a power-play goal.

Sorokin robbed Guentzel on a shot in the final minute of overtime.

DeSmith made a highlight-reel save of his own, using his blocker to deny Brock Nelson during a New York power play in the third period.