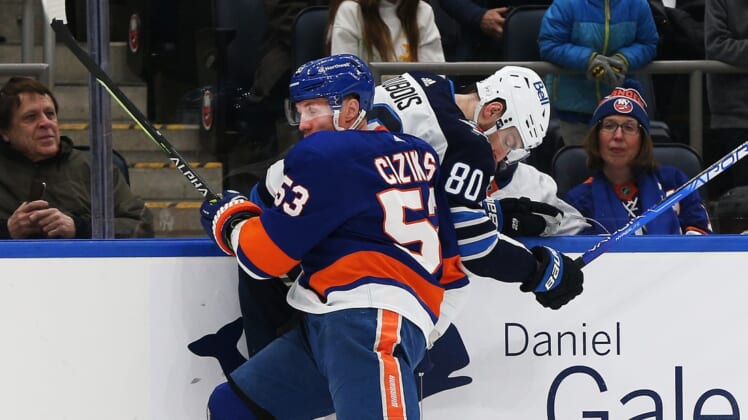 Brock Nelson scored in the first period and Bailey and Anders Lee scored 40 seconds apart early in the second for the Islanders, who have won back-to-back games for the first time since winning three in a row from Jan. 17-21.

Bailey, who snapped an 18-game goal-scoring drought on Thursday in New York’s 6-0 win over the Columbus Blue Jackets, scored his second of the Friday game at 7:14 of the third period. Cal Clutterbuck added an empty-netter with 4:44 remaining.

Kyle Connor and Blake Wheeler scored for the Jets, who had a two-game winning streak snapped as they remained five points behind the Dallas Stars in the race for the final Western Conference wild-card spot.

A hooking penalty on Connor set up the power play on which Nelson scored 6:38 into the first period. Nelson took a pass from Anthony Beauvillier and fired a shot under Hellebuyck’s arm.

Bailey and Lee combined to quickly give the Islanders a two-goal lead early in the second.

Bailey followed the rebound of his own shot at the goal line and scored 1:09 into the period. Lee then pounced on the rebound of a Beauvillier shot and shuffled the puck before tucking it into the upper middle part of the net past a sprawling Hellebuyck. It was Lee’s six goal in the past three games and fourth in two nights.

The Jets pulled within 3-2 just 20 seconds into the third period. Paul Stastny got a stick on a shot by Dylan DeMelo, and the puck bounced in the crease before glancing off Wheeler’s skate and trickling past Varlamov.

Bailey, who had just three goals in his first 45 games this season, extended the Islanders’ lead back to two goals. He followed Adam Pelech’s shot and went to the backhand to close out his first two-goal game since April 20, 2021, against the New York Rangers.