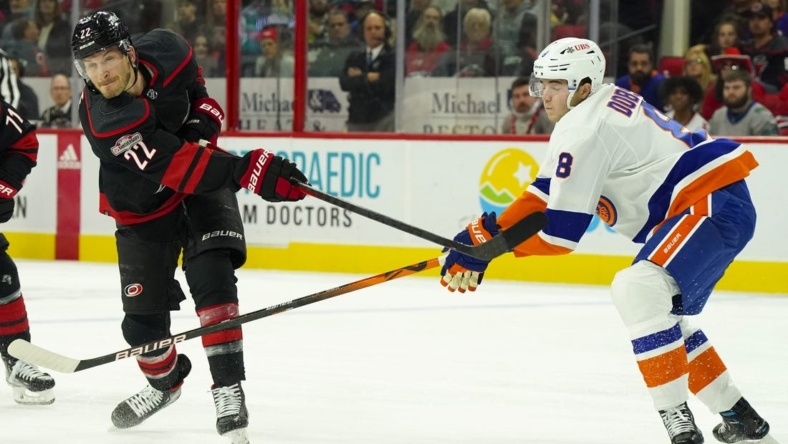 Mathew Barzal and Anthony Beauvillier each posted two assists and goalie Ilya Sorokin made 33 saves just two nights after a shutout of the New York Rangers.

The Islanders notched the first goal 16:29 into the game when Barzal led a breakout and passed back to Wahlstrom, who buried a shot from the right side.

Necas tied it in the second period, sending a pass to Brady Skjei and then taking the return delivery and sending the puck past Sorokin.

Martin gave the Islanders a lead off a Carolina turnover only to have Burns knot the game just 66 seconds later. It was the veteran defenseman’s first goal as a Hurricane.

Then Bailey scored less than a minute later, making a total of three goals in a 1-minute, 57-second span.

The Hurricanes were in position to extend the scoring spree by going on a 5-on-3 power play before the period ended. When Islanders center Jean-Gabriel Pageau was stuck on the ice for an extended shift without his stick, it seemed to add to the chances that New York would allow a power-play goal for the first time. The Islanders still killed off Carolina’s chance.

Nelson recorded his first goal of the season 3:59 into the third period and his second came just more than seven minutes later.

Bailey, a right winger, became the third player in Islanders history to reach the 1,000-game mark with the club.

The Hurricanes had three nights off after a 3-1-1 road trip against Western Conference opponents.