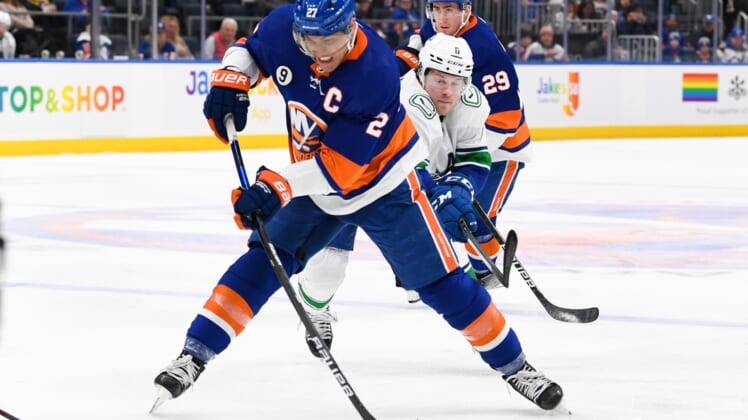 Winnipeg Jets goalie Connor Hellebuyck got a rare night off Thursday. About 35 miles away, the New York Islanders produced an even more uncharacteristic offensive outburst.

Hellebuyck likely will be tasked with trying to slow down the Islanders on Friday, when the Jets head to Elmont, N.Y., for their first game on Long Island in more than two years.

Each team earned a win in the metropolitan New York area on Thursday.

Backup goalie Eric Comrie made 33 saves for the Jets in a 2-1 win over the New Jersey Devils in Newark, N.J. Meanwhile, Islanders captain Anders Lee collected his first career hat trick as New York rolled to a 6-0 win over the visiting Columbus Blue Jackets.

Hellebuyck, whose 48 appearances are tied for the most among NHL goalies with the Nashville Predators’ Juuse Saros, started the previous four games before Comrie made his first start since Feb. 27.

“When (Comrie) gets his chance, he’s been ready to go,” said Jets left winger Kyle Connor, who scored the game-winning goal Thursday on an unassisted breakaway in the final minute of the second period. “He’s such a hard worker — bit of a quiet kid in the locker room, but he’s got a good quiet confidence about him and you can see it tonight for sure.”

The win pulled the Jets within five points of the Dallas Stars in the race for the final Western Conference wild-card spot.

The suddenly prolific Islanders could present a challenge for Hellebuyck, who has allowed at least four goals in each of his past five starts dating back to Feb. 25.

The Islanders rank next to last in the NHL with 142 goals but have scored 10 times in the past two games, their most prolific back-to-back stretch of regular-season games since totaling 10 goals in consecutive wins over the Washington Capitals and Philadelphia Flyers last April 1-3.

Lee scored the final two goals Wednesday — including a power-play tally with 1.4 seconds left — to finish off the first hat trick of his 568-game career and cap off the Islanders’ most prolific game at UBS Arena, which opened in November.

The six-goal margin of victory was the largest for New York since an 8-2 win over the Detroit Red Wings on Jan. 14, 2020.

Lee, who scored twice in a 5-4 loss to the Colorado Avalanche on Monday, said he was looking forward to getting back on the ice Friday.

The Islanders haven’t won back-to-back games since a three-game run from Jan. 17-21. New York has gone 8-11-2 since then and enters Friday 20 points behind the team that holds the Eastern Conference’s final wild-card position, the Washington Capitals — though the Islanders have five games in hand.

“I think it’s nice that we can come back (Friday) and get another game under us and continue to build it and finish as strong as we can,” Lee said.

The Jets haven’t visited the Islanders since Oct. 6, 2019, when the hosts earned a 4-1 win in Uniondale, N.Y. The teams didn’t meet during the pandemic-shortened 2020-21 campaign, when the regular season schedule consisted entirely of division games. New York beat Winnipeg 2-0 in Manitoba on Nov. 6 — its final win before an 11-game losing streak.