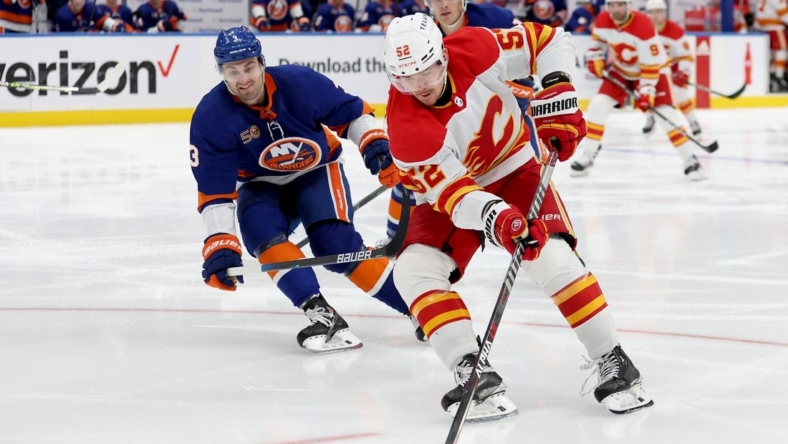 Noah Dobson scored a power-play goal with less than a minute left in overtime Monday night for the host New York Islanders, who overcame a two-goal third period deficit to beat the Calgary Flames, 4-3, in Elmont, N.Y.

The Islanders were outshot 30-12 through two periods while falling behind 3-1, but Anders Lee and Kyle Palmieri scored 59 seconds apart shortly beyond the midway point of the third. New York was outshot 5-0 in overtime before Rasmus Andersson was whistled for interference after he crashed into Adam Pelech following a save by goalie Ilya Sorokin.

Mathew Barzal faked a shot before dishing to Dobson, who fired a sizzling shot over the right shoulder of Jacob Markstrom, who was screened by Lee, to give the Islanders the win in their first overtime game of the season,

Sebastian Aho scored in the first for the Islanders, who have won six of seven. Sorokin made 43 saves.

Mikael Backlund scored twice and Elias Lindholm had a goal for the Flames, who have lost five straight (0-3-2). Markstrom recorded 28 saves.

The teams traded goals within a 70-second span in the first. Backlund had a shot blocked by Pelech before he positioned himself at point-blank range and scored off a pass by Jonathan Huberdeau with 8:54 left.

Barzal helped tie the game by racing up the left side of the ice and feeding Aho, who flicked the puck over Markstrom’s stick.

Lindholm won a faceoff with Brock Nelson deep in the Islanders’ zone before he redirected a shot by Noah Hanifin to give the Flames the lead with 3:39 left in the first.

Calgary went ahead 3-1 with 5:54 remaining in the second after Aho’s clearing pass sailed beyond Palmieri and to Nikita Zadorov. The defenseman passed to Backlund who fired a slap shot past Sorokin.

Another end-to-end rush by Barzal sparked the Islanders’ comeback with 9:52 left, when Lee backhanded home the rebound of a shot by Nelson. Palmieri tied the score when he picked off Nick DeSimone’s pass deep in the Flames’ zone and scored an unassisted goal.