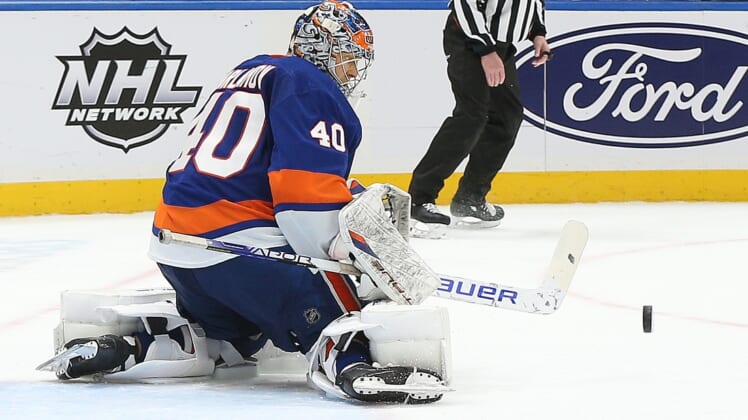 The New York Islanders’ chances of making the playoffs dwindle by the day. But on Sunday night, the Islanders can complete a homestand in which they at least made the path to the postseason difficult for other teams.

The Islanders will look to win their third straight game Sunday when they host the Anaheim Ducks in Elmont, N.Y.

New York was off Saturday after earning a 5-2 win over the Winnipeg Jets on Friday night. The Ducks will be completing a back-to-back set after falling to the New Jersey Devils, 2-1, in a shootout Saturday night in Newark, N.J.

The win Friday gave New York its first winning streak since a three-game run from Jan. 17-21. The Islanders, who made the NHL semifinals each of the previous two years, have spent most of this season trying to recover from an 11-game losing streak they endured in the midst of a COVID-19 outbreak from Nov. 7 through Dec. 5. They entered Sunday 20 points behind the Washington Capitals in the race for the final wild-card spot in the Eastern Conference.

“Everything’s better and feels right when you’re winning,” said Islanders center Brock Nelson, who scored a goal for the fourth straight game Friday, when he collected his team-high 23rd goal. “We’re trying to string some (wins) together. Nobody is content or happy with where we’re at.”

The Islanders have spent the back half of a six-game homestand adding to the unhappiness of other teams on the outside of the playoff picture. The victory over the Jets on Friday kept Winnipeg from getting closer to the second wild card in the Western Conference; they’re six points behind the Vegas Golden Knights. And a 6-0 win on Thursday over Columbus ensured the Blue Jackets, who entered Sunday 13 points behind the Capitals, wouldn’t gain any ground in the Eastern Conference playoff race.

Hosting Anaheim, which enters Sunday four points behind the Stars, provides the Islanders another chance to play the role of spoiler. The loss Saturday dropped the Ducks to 0-2-1 on a five-game road trip and was the sixth loss in eight games (2-5-1), a stretch in which they’ve been outscored 32-17.

The loss to the Devils represented some progress for the Ducks, who held a 1-0 lead against New Jersey after allowing the Chicago Blackhawks to score six unanswered goals in the first 21 minutes of an 8-3 loss on Tuesday and being blanked through 54 minutes of a 4-1 loss to the Nashville Predators on Thursday.

“We’ve been talking a lot about checking better and not getting into these track meet kind of games,” Ducks head coach Dallas Eakins said. “The one thing you don’t want to do in this league is just be (haphazard0 with your game and then have to go score seven or eight to win. To only give up one going into the shootout is a step in the right direction, but I still think we can make better decisions through that neutral zone.”