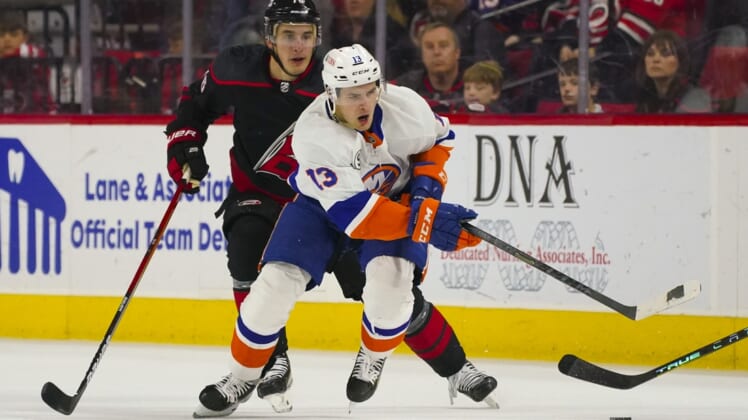 Kyle Palmieri scored with 14.1 seconds left in the third period to lift the New York Islanders to a 2-1 win against the Carolina Hurricanes on Friday night in Raleigh, N.C.

Jean-Gabriel Pageau scored for the third straight game, and Ilya Sorokin made 20 saves for the Islanders (33-28-9, 75 points), who have won five of six.

Vincent Trocheck scored the tying goal with 57 seconds left, and Frederik Andersen made 19 saves for Carolina (46-18-8, 100 points), which lost for the third time in four games and was unable to add to its two-point lead over the New York Rangers for first place in the Metropolitan Division.

Trocheck prevented Sorokin’s seventh shutout of the season when he scored with Andersen pulled for the extra skater.

Palmieri then came out from behind the net and scored the game-winner less than a minute later.

Kyle Palmieri won the puck from Hurricanes defenseman Ethan Bear and got the puck to Matt Martin behind the Carolina net. He passed the puck out to Pageau for the one-timer from in close.

It was the fifth goal in the past three games for Pageau.

Palmieri’s assist gave him four points (one goal, three assists) in the past three games.

The Hurricanes, who were coming off a 5-3 win against the visiting Buffalo Sabres on Thursday, were outshot 8-1 in the second period.

New York didn’t take its first shot on goal in the third period until 8:53 remained.

The Islanders then went on their fourth power play of the game when Andrei Svechnikov sent the puck over the glass for a delay of game penalty with 7:08 left, but the man-advantage ended 52 seconds later when Zach Parise was whistled for tripping Brett Pesce.

Carolina came in with the No. 1 penalty kill unit in the NHL at 88 percent.

Andersen came in leading the NHL in goals-against average (2.07) and third in save percentage (.926). Sorokin came in with the second-best save percentage in the league (.927), and the fifth-best GAA (2.30).