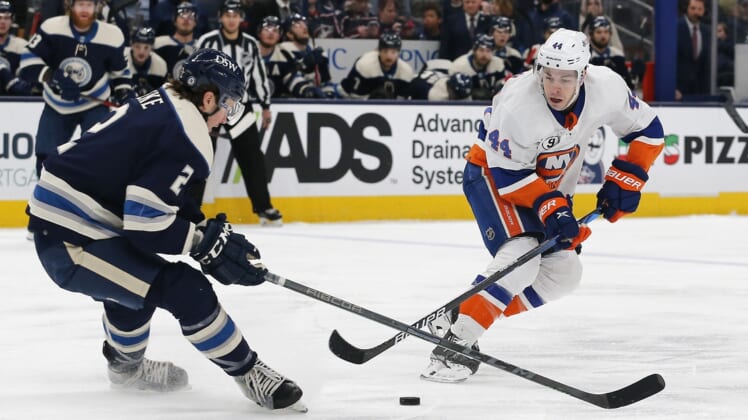 Brock Nelson scored to begin a stretch of four unanswered goals by the visiting New York Islanders, who hung on Tuesday night to edge the Columbus Blue Jackets 4-3.

Josh Bailey, Anthony Beauvillier and Zach Parise also scored for the Islanders, who scored all their goals in a span of 17-plus minutes bridging the first two periods. Goalie Semyon Varlamov made 42 saves as New York snapped a two-game losing streak.

The Blue Jackets took a brief lead 7:20 into the first when Varlamov deflected a shot by Patrik Laine but couldn’t scramble back into position fast enough to stop Gavrikov from poking home the rebound beyond Varlamov’s stick.

The Islanders began their flurry with a power-play goal fewer than four minutes later. Mathew Barzal’s pass into the crease bounced off the skate of Anders Lee to Nelson. He put a shot past Gavrikov, who did a split to try to block the shot, and a sprawling Merzlikins with 8:13 remaining.

Bailey began and ended the sequence that led to the go-ahead goal 3:22 later. The right winger stole the puck from Adam Boqvist in the neutral zone and dished to Jean-Gabriel Pageau, who passed back to Bailey who scored from the middle of the slot.

The Islanders continued their surge 3:47 into the second when Nelson fired wide of the net before Beauvillier put back an odd-angle shot from the goal line. A stick-to-stick pass from Noah Dobson to Parise, the latter of whom was crashing the crease, extended the lead to 4-1 at the 9:10 mark.

The Blue Jackets began an attempted comeback with 6:28 left in the period, when Gavrikov backhanded the rebound of a shot by Jakub Voracek.

Bjorkstrand was credited with an unassisted goal 4:30 into the third, when Matt Martin got a stick on a pass by Boqvist but couldn’t corral it before Bjorkstrand pounded on the puck and beat Varlamov.

The Blue Jackets almost tied the game with 6:45 left, when Jack Roslovic and Sean Kuraly peppered Varlamov before he smothered the puck just before it would have crossed the goal line. The Islanders withstood two shots by Columbus during a power play generated when Beauvillier was whistled for tripping with 2:35 remaining.